04/10/2013
In the morning of July 8th, 2013, at the office of the Central Vietnam Women’s Union, VWU’s President Nguyen Thi Thanh Hoa received the 2-member delegation of the Marie Schlei Association (MSA-Germany) headed by Prof. Christa Randzio Plath, President of MSA, Former President of the Economic and Monetary Affairs Committee of the European Parliament, on the occasion of their visit to Vietnam to participate in an international seminar on the amendment of the Vietnam Law on Marriage and Family and to evaluate a number of development projects implemented by VWU with the funding of MSA. 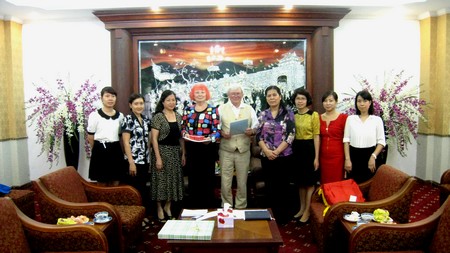 At the meeting, Prof. Randzio Plath informed the President the results of the MSA’s field trips to Hai Phong City, Quang Ninh and Hung Yen provinces to evaluate the implementation and impacts of the vocational training and credit support projects funded by MSA and directly implemented by the 3 municipal VWU since 2002. The delegation expressed their satisfactory to the serious project implementation by the VWU of 3 city/provinces and the project beneficiaries as well as the efforts and the progress of the project women. With the projects’ training courses and credits, the project women have created jobs for themselves and other family members, had more income and improved their living conditions. Besides, according to Prof. Randzio Plath, in comparison to what it was in her past visits, the project women have made significant progress in their awareness and professions, particularly in their confidence to express their opinions.

In addition to her comments o­n the positive impacts of the projects, Prof. Randzio Plath expressed her anxiety o­n the hardness and difficulties facing rural Vietnamese women and wished that those women should be given more opportunities to participate in training courses and to have jobs. She also highlighted the necessity of the production group establishment so that women could share and exchange their experiences and support each other in order to improve the production and marketing effectiveness, and still have more leisure time and other social activities.

The two sides also exchanged opinions o­n other women-related issues such as marriage, family and the participation of VWU in the amendment of the Vietnam Law o­n Marriage and Family, in the fulfillment of the MDG 3 o­n gender equality and women empowerment to 2015 and its post-2015 program.

President Thanh Hoa expressed VWU gratitude to MSA members for their support over the past 14 years. o­n this occasion, the VWU Merit Medal “For the Development of the Vietnamese Women” was conferred o­n five MSA’s members including Prof. Ronald Randzio to acknowledge their constant support since 1999. o­n behalf of the awardees, Prof. Ronald Randzio expressed his honor to receive such a meaningful gift from VWU. With his love to Vietnam, he would continue standing side by side and supporting the Vietnamese women. o­n behalf of MSA members, Prof. Christa Randzio Plath thanked President Thanh Hoa for the active and fruitful cooperation by the VWU, and its acknowledgment and encouragement to MSA.ffice.