25/04/2019
Following the visit to Italy, the VWU delegation led by Mrs. Nguyen Thi Thu Ha - Member of the Party Central Committee, VWU President paid a working visit to Germany from 26 to 30 March2019. 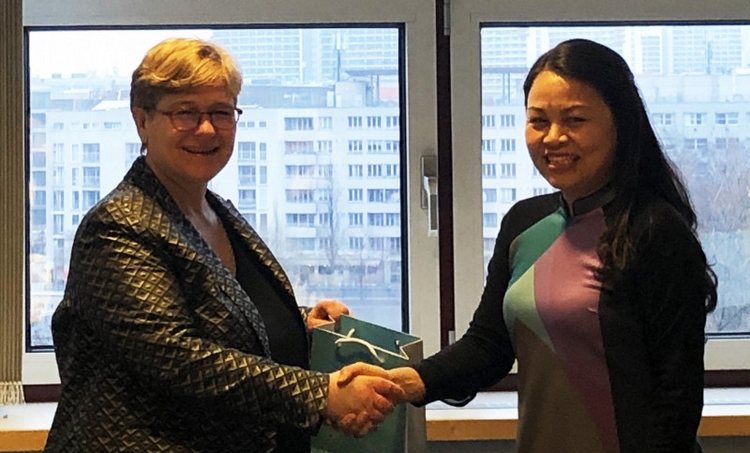 Working with the Ministry of Foreign Affairs and the Ministry of Economic Cooperation and Development (BMZ) of Germany, President Thu Ha expressed her pleasure at the improvement of the Vietnam-Germany strategic partnership. The two sides discussed the situation of women in respective countries in different fields. The German side was impressed by the participation of Vietnamese women in the labor force, business and the National Assembly and shared its experience to promote gender equality, such as setting the percentage of women in politics and in large-scale companiesto increase the proportion of female parliamentarians; proposing lists of candidates with a mix of men and women by some political parties,…

On behalf of the Vietnamese delegation, President Thu Ha specified some major challenges for Vietnam currently such as climate change, quality of female human resources, the need for green and sustainable development which are strengths of Germany. As such, she hoped that Germany could share their experience and support Vietnam, especially Vietnamese womento cope with climate change in the Mekong Delta river.

The German Ministry of Foreign Affairs showed its commitment to mainstreaming gender in the bilateral cooperation for greater participation of women and women's organizations.

During the meeting with the German Savings Bank Association (DSGV), the experts enthusiastically introduced and shared the DSGV's experience during its 200 years of development and its investment priorities such as digitalization of services to improve operational efficiency, dual vocational training system in savings banks, social activities and financial education for the community, especially the younger generation ...

The Savings Banks Foundation for International Cooperation, SBFIC (under DSGV) has cooperated and supported the VWU in the area of microfinance since 2004 and achieved significant successes, namely the regional project with the participation of Laos, Cambodia and Myanmar since 2009.

Taking this opportunity, President Thu Ha thanked SBGV and SBFIC for assisting the VWU to develop microfinance model during the last 15 years and thereby becoming the leading organization in microfinance in Vietnam. The supported activities have not o­nly help poor women have a habit of saving and escape from poverty, but also help the VWU to renew its operational contents and methods, attracting more women to participate in the VWU's activities.

On this occasion, VWU President Nguyen Thi Thu Ha also had a meeting with the Rosa Luxemburg Foundation.. In addition to sharing the women’s situation of the two countries, the two sides agreed to continue to explore the possibility of cooperation in organizing conferences and seminars o­n promoting gender equality and share experience in ensuring working conditions for female labourers.

The visit successfully completed and opened up opportunities for cooperation with governmental and non-governmental German partners.