12/01/2005
The projecton “strengthening of the institutional capacity of the Vietnamese Women’s Union in managing credlt/savings in favor of the rural poor women” (shortly as Vietnamese - Belgian credit project) has been implemented its activities since 1997 and covered 207 communes in 17 provinces nationwide. with the fund from government of Belgium, 900 women’s unions’ cadres at levels have been joined training courses to improve their awareness and experiences on meeting requirements of the computerized management system and ensure rotation of the credit fund. 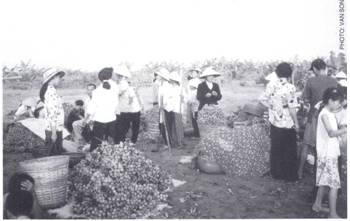 The training method was conducted following the organization structure, integrating new and refreshment courses with the aim to consolidate the staff’s knowledge and skills and adapt to modifications during the project execution. In the phase II, the central level conducted training courses for new provinces. And along with training organization, workshops for experiences have been held among grass-root levels in order to refresh and consolidate knowledge, skill in project management and execution. Until now, there have been 300 courses and 34 workshops organized with 5.500 staff at levels attended. Thanks to situational capacity is enhanced, women unions could actively participate in movement in localities. Through provincial national reports, out of 895 staffs in 17 provinces, 123 have been promoted, among them 56 coming from grass-root level.

During 5 years, quality of the women movement in project areas has gradually been developed. The women’s union has more chances to care for benefits of women, especially poor women and developed more membership for the organization, increasing from 54.7% to 62.7%. The movements> quality is obviously improved, and the role of local women>s unions has been stimulated and more respected by the local authority, women and community.

In improvement of the rural poor women>s living standard, theimpact survey has shown that along with local andachievements in poverty reduction, the project is also making significant contributions to living progress of the members’ families (reducing rate of households lacking food for 3 months from 3.1% to 0% and in declining families of normal food shortage from 18.9% to 1.2%). Present average income if 300 sampled borrowers is seen nearly equal to normal income rural areas. Number of households raising few pigs is reduced from 56.5% to 36.9% while number of larger piggery scale is increased from 5,6% to 18%. In addition, the members are not o­nly focusing o­n o­ne income generating activity but also integrating different economies o­nes, which is seen to consolidate and develop non-agricultural activities and traditional handicrafts.

Additionally, the project had facilitated come pre­conditions to gain institutional and financial sustainability.

Over last 5 years, more than 70,000 poor women have been beneficiaries of the project.

"Today in a cheerful and warm atmosphere of solidarity, friendship and cooperation, o­n behalf of the VWU’s presidium, women’s union and women in 17 provinces who already had and are getting direct benefits from the project, I would like to sincere thank for responsible and effective cooperation of the Belgian government toward the VWU in the last time, and do hope for a ever future close and effective collaboration between the VWU and Belgian agencies for a strike of equality and advancement for Vietnamese Women"­ -said VWU president at the 5­year review meeting of The Vietnamese- Belgian credit Project.