13/06/2019
On the morning of May 30, 2019, the Vietnam Women's Union (VWU) organized a farewell ceremony to Mr. and Mrs. Teumer - Country Representative of the German Savings Banks Foundation for International Cooperation (SBFIC) in Vietnam, a close collaborator of the VWU since 2005. 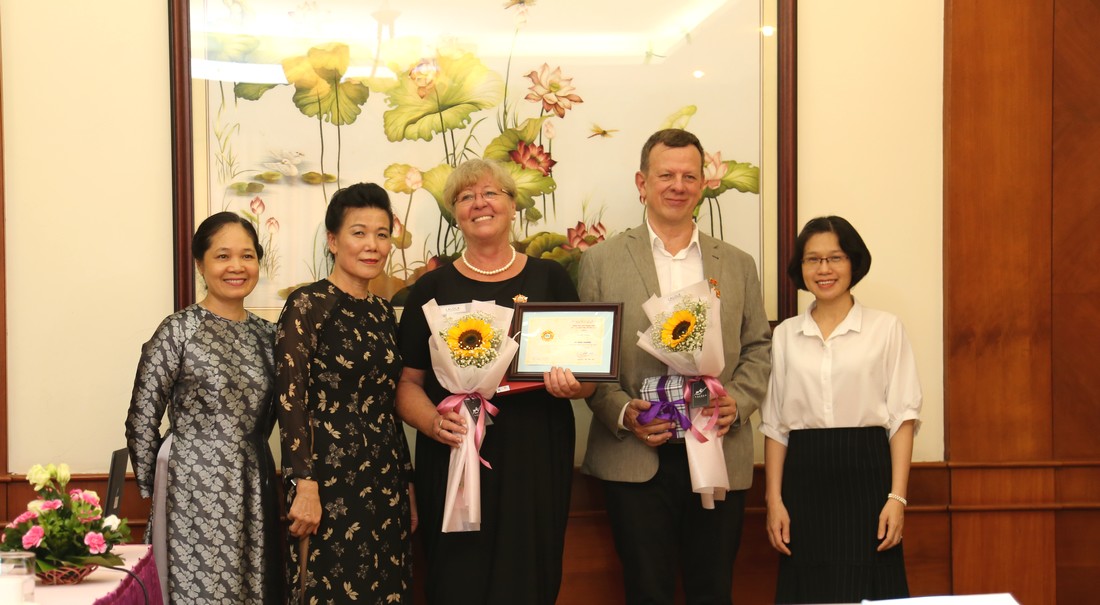 Among many experts and collaborators working with the VWU, Mr. Joerg Teumer is a very special person with many "best": working in Vietnam for the longest time (24 years) in which 14 years working for the VWU, being the most proficient Vietnamese-speaking expert, working with most departments/units and many officials of the Central VWU.

During his term in Vietnam, Mr. Joerg has particularly provided effective support to the VWU in the field of microfinance, contributing to bring VWU's microfinance activities to be more professional, of which TYM Fund has become the first licensed microfinance institution in Vietnam.

Besides, he was awarded many noble awards including the Medal "For the Young Generation" of Ho Chi Minh Communist Youth Union (1989); Medal "For the Development of Vietnamese Women" of VWU (2007); Medal Friendship of the State of Vietnam (2012); Certificate of Merits for the 2012-2017 term of the VWU Central Committee (2017).

Coming to Vietnam since 2005, Mrs. Ines Teumer has always accompanied and supported her husband, indirectly contributed to the success and replication opportunities of VWU microfinance projects. In particular, she directly supported many activities of the VWU such as teaching English to TYM’s staffs, charity fundraising for poor women and children in Vietnam, making arrangements for VWU delegations to Germany, Myanmar, and the Philippines as well as for many VWU's German partners to Vietnam.

Speaking at the farewell ceremony, VWU Vice President Nguyen Thi Tuyet was moved to acknowledge that Mr. and Mrs. Teumer have made great contributions in helping and supporting the VWU, especially in microfinance activities, in connecting the VWU with international organizations and friends in Germany, Netherlands ... Moreover, the SBFIC has provided financial support to VWU amounted to over 60 billion in implementing microfinance activities, in capacity building for VWU's staffs in general and its financial activities in particular.

Saying goodbye to the VWU and Vietnam, which they considered as their second home after 24 years of attachment, Mr. and Mrs. Teumer expressed their deep feelings and sincere thanks for love and appreciation of the VWU. He was also convinced of confidence in the VWU development and Vietnam in near the future.

On behalf of the VWU leaders, Vice President Nguyen Thi Tuyet awarded Ms. Ines Teumer with a Medal for the development of Vietnamese women.