31/12/2013
Implementing the Resolution No. 36/NQ-TW of the Politburo on the affairs of overseas Vietnamese and Resolution No.11/NQ-TW of the Politburo on women's work in the period of stepped-up national industrialization and modernization, and with the aim of meeting the needs of exchanging, sharing and connecting of Vietnamese women living and working abroad, from November 19th-22nd 2013, the Vietnam Women's Union (VWU) and the National Committee for Overseas Vietnamese Affairs co-organized a conference on overseas Vietnamese women. This was the first major event dedicated to this target group, which marked the accomplishment of a goal VWU has been concerned with for a long time. 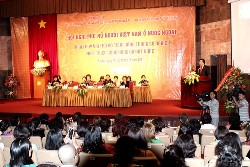 After the solemn opening ceremony, 56 delegates who have made ​​outstanding achievements in community work and uniting overseas Vietnamese women were awarded by the Ministry of Foreign Affairs and the Vietnam Women’s .

During the two working days, the conference included 3 seminars o­n: Sharing experiences in gathering and uniting overseas Vietnamese women abroad; Overseas Vietnamese women contributing to promoting national identities; and Connecting Vietnamese female entrepreneurs and intellectuals at home and abroad. According to VWU’s statistics, Vietnamese women’s organizations have been formed in 17 countries, most of which are European, taking o­n various forms such as: women's unions, women's clubs and women's groups. Furthermore, in some areas, although there is not a specific organization for Vietnamese women, sisters are actively getting involved in Vietnamese associations and contributing to the overall development of the community. Women’s organizations have carried out many diverse activities which meet both specific needs of women as well as the general needs of the community.

After the two-day seminar, the delegation visited a number of historical monuments and attended a great requiem for heroic martyrs and the people who sacrificed themselves for the national defense in Thanh Hoa province. This is a notable activity that helped the participants recall the glorious national history and assisted in promoting the heroic tradition of the Vietnamese proverb: "when you eat a fruit, think of the man who planted the tree”. The overseas Vietnamese were moved to have had the opportunity to attend this activity and confirmed that they would continue their activities in support of the homeland.

On this occasion, the delegation visited some initiatives of the local women, such as a TYM branch in Quang Xuong district, a mushroom cooperative, and a farm of a former volunteer youth group. The participants were very impressed with the activities and the overall movement of women in the country. They also made financial contributions to these initiatives. The visit helped overseas Vietnamese women learn more about women’s conditions as well as the women’s movement in the country. This helped build a relationship of support and understanding between Vietnamese women inside and outside the country.