15/03/2021
The Vietnam Women’s Union Central Committee and the Vietnam Academy of Science and Technologyheld a ceremony on March 5 to mark the 35th founding anniversary of the Kovalevskaia Awards and present the 2020 awards to outstanding female scientists. 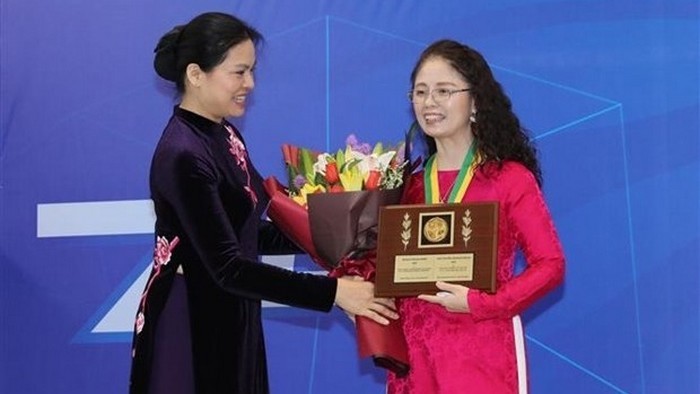 Addressing the ceremony, Chairwoman of the Vietnam Women’s Union Central Committee Ha Thi Nga said that the noble award was named after Russian mathematician Sofia Kovalevskaia and was introduced to Vietnam in 1985.

This is an international award dedicated to female scientists in recognition of their significant contribution toscientific research and in the application of science and technology, especially the natural sciences, an area playing a key role in the knowledge economy.

Over the past 35 years, the Kovalevskaia Award has been presented to 20 female collectives and 49 individuals in the areas of mathematics, physics, chemistry, biology, agriculture, medicine, information technology, and others.

“The contributions of collectives and individuals who have won the Kovalevskaia Award demonstrate the talent, ability, creativity and wisdom of Vietnamese female scientists on their way to conquering many scientificheights,” said Ha Thi Nga.

At the ceremony, the Kovalevskaia Awards 2020 were presented to the female collective at the Institute of Natural Products Chemistry (Vietnam Academy of Science and Technology) and Associate Professor-Doctor Truong Thanh Huong, Senior Lecturer in the Cardiology Department at the Hanoi Medical University (Ministry of Health) for their contributions to the nation’s scientific community.

Truong Thanh Huong has made considerablecontributions to the national health sector thanks to her research projects aimed at improving treatment methods for cardiovascular- diseases.

Meanwhile, products formed from the results of scientific research projects by the Institute of Natural Products Chemistry have been widely circulated in the market, contributing to public health care and protection.