21/10/2016
On September 10, the successful performance of the weightlifter Dang Thi Linh Phuong earned Vietnam a bronze medal at the 2016 Rio Paralympics in Brazil in the women’s 50kg category with the lift of 102kg. 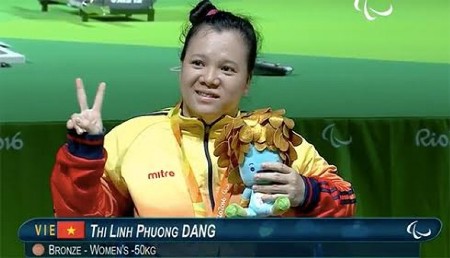 Linh Phuong had not been highly appreciated in this category because of her strong competitors. However, while her two competitors from and failed in their performances, Linh Phuong outstandingly succeeded in her two attempts, which brought her the bronze medal. She is the first female athlete to win a Paralympic medal for ’s Disabled sport.