Towards a Society for All Ages 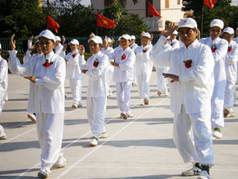 There are more old people in the world than ever before. More than 1 person in 10 is over the age of 60 and older generations are growing faster than other age groups in the population. In 2050, it is estimated that more than 1 in 5 persons will be more than 60 years old.

Population ageing is a reflection of our successes in human development. We live longer and are healthier than ever, which is o­ne of humanity’s major achievements. But societies must ensure that the quality of life of older persons is enhanced and their rights are protected so they can live in dignity. This is especially important during the financial crisis. Strong social security systems are needed that provide services and an adequate standard of living, and that promote solidarity among generations.

“I call o­n governments and communities to ensure that older persons can lead healthy and productive lives and make full use of the skills and abilities they have acquired in their lives. This will not o­nly benefit older persons, it will benefit society as a whole,” Thoraya Ahmed Obaid, UNFPA Executive Director, said in her message o­n the occasion of the 10th anniversary of the International Day of Older Persons.