30/09/2009
After nearly one year of rest because of injuries, runner Vu Thi Huong on September 16 returned impressively, setting a national record in the women’s 100m race at the National Track and Field Championship 2009. 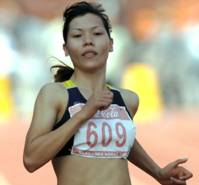 The new record was 11.43 seconds, while her previous record at the 24th Southeast Asian Games was 11.47 seconds. Notably, Huong left the silver-medal winner, Le Ngoc Phuong, several metres behind.

She also helped her team, An Giang province, to win the gold medal in the women’s 4x200m relay race.

The tournament will continue until September 20.