15/03/2021
The Vietnam Women’s Museum in Hanoi recently received photos, documents and items with the theme “Memories and Heritage” from diplomats, photojournalists, female doctors, and fashion designers. 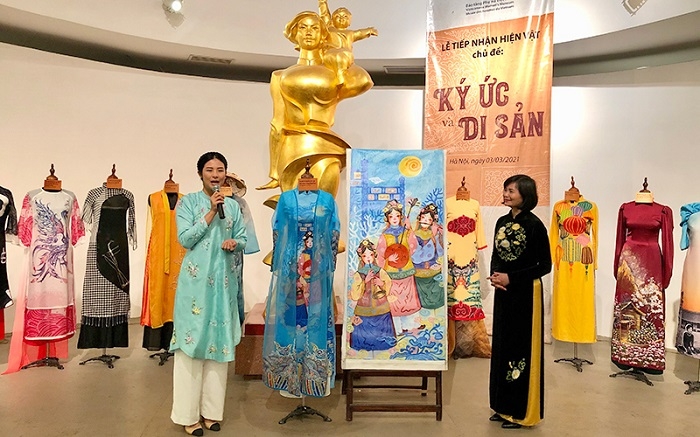 Miss Vietnam 2010 Dang Thi Ngoc Han presents her Ao Dai designs to a representative from the Vietnam Women’s Museum at the ceremony.

The event was amongst the museum’s activities to honour the Ao Dai (traditional Vietnamese long dress) while marking the 111th International Women’s Day on March 8, and responding to the “Week of Ao Dai” as launched by the Vietnam Women’s Union.

More than 20 Ao Dai designs and nearly 400 photos capturing the beauty of Vietnamese women were presented to the museum at the ceremony, expected to promote the cultural values of the traditional outfit.

Notably, Ambassador Nguyen Phuong Nga, former Deputy Foreign Minister and President of the Vietnam Union of Friendship Organisations, donated two Ao Dai outfits she wore during a ceremony to receive a decision on her appointment as Ambassador and head of Vietnam’s Permanent Mission to the UN, and a ceremony to present a Letter of Credentials from then State President Truong Tan Sang to UN Secretary General Ban Ki-Moon in 2014.

She said that the two outfits reminded her that she was representing Vietnam and the country’s women, adding that she always fell proud, honoured and confident while wearing Ao Dai at international and diplomatic events.

As Ao Dai reflects the tradition and culture of Vietnam, it garners much interest and appreciation from international friends, she revealed.

The donors included many young designers from across the country, who previously hosted a display of 1,000 Ao Dai designs at the Temple of Literature in Hanoi last year. At the event, they presented 20 designs of the exhibits to the Vietnam Women’s Museum.

Inspired from Vietnam’s UNESCO-recognised heritages such as Ha Long Bay, Phong Nha – Ke Bang National Park, My Son Sanctuary, Ho Dynasty Citadel, Hoi An ancient town, and the cultural space of gongs in Central Highlands, designers Vu Tran Duc Hai, Trinh Bich Thuy, Ha Duy, Lan Huong and Ngoc Han vividly featured the beauty of Vietnam on the laps of the Ao Dai while honouring the elegance of the women who wear them.

Utilising the art of painting, and traditional materials, designer Dang Thi Ngoc Han, who was crowned Miss Vietnam 2010, decided to revive paintings by artist Pham Trinh into her Ao Dai designs. Donating an Ao Dai from her collection on Hue’s royal court music to the museum, Han expressed her hope that her design will help to introduce the culture and treasured value of the art form to international friends.

Meanwhile, photojournalist Dinh Quang Thanh presented nearly 400 photos to the museum featuring the beauty of Vietnamese women in labour and life as well as craft villages and local landscapes. His photos tell the stories of Vietnamese women from across the country.

According to Director of the Vietnam Women’s Museum Nguyen Hai Van, the items and photos donated by organisations and individuals at the event will contribute to diversifying the museum’s collection while helping promote Vietnamese culture and women, thus inspiring public pride and the sense of responsibility in preserving and promoting the country’s heritage.

Ao Dai has become a symbol of Vietnamese identity, spirit and culture. It not only honours the elegance of Vietnamese women but also conveys stories about the country’s culture.

The donated photos and items at the ceremony will soon be displayed to the public, helping domestic and foreign visitors take a closer look and increase their understanding about Vietnamese Ao Dai.