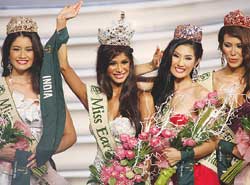 Faria, from , won the affection of judges with her response to the question "For you, what is more important: sunrise or sunset?" Her answer: "I will obviously choose sunrise because whenever we see the sunrise, people will think about a new day filled with energy. A new day offers 24 valuable hours to do good things for ourselves and other people."

Originally a model, the 1.76m-tall Faria won the title Miss Talent earlier in the pageant with her exotic belly dance that combined Oriental and Middle Eastern styles.

One of the world's three most prestigious beauty contests, including Miss World and Miss Universe, Miss Earth is the o­nly pageant that gives all runners-up a title.

Except for winning The Best in Swim wear, Miss Viet Nam Luu Thi Diem Huong, didn't win any significant titles during the event, although she was among the top 14 contestants.

During the final night of the pageant, which took place at the five-star Vinpearl Land Resort & Spa, all 84 contestants strutted their stuff in swim wear, evening gown and ao dai (Vietnamese women dress) performances.