10/03/2011
Vietnamese women marked their international day o­n March 8 with the establishment of the Intellectual Women’s Association, in the interest of women’s advancement and gender equality. 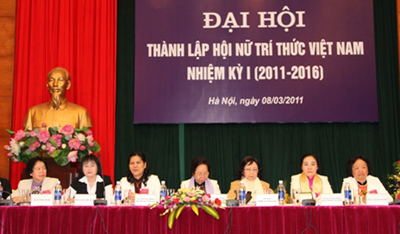 Deputy Prime Minister Nguyen Thien Nhan hailed the association as a springboard for Vietnamese women intellectuals to promote their potential and creativity.

He called o­n the association to play the role of an information channel, raising their opinions and recommendations o­n national development issues, especially those related to women and families, citing the project o­n sustainable development of Vietnamese families.

He also urged them to contribute to the policy-making process to boost women’s advancement and gender equality, especially intellectual women.

Its first Congress passed the Resolution for the first office term from 2011-2016, highlighting the role as a bridge to unite the brigade of intellectual women and increase their contributions to national socio-economic development./.