10/06/2010
Many female labourers, particularly those working in industrial parks, suffer from low wages, overwork and inadequate living conditions, according to a survey of 34 enterprises in 10 provinces by the Viet Nam General Confederation of Labour. 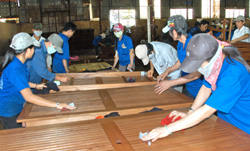 The enterprises, which employ 70 per cent of the total female workers in those provinces, are divided into joint ventures, private businesses and State-owned corporations, according to Pham Thi Thanh Hong, deputy head of the confederation's Women Department.

Hong said her department began the survey in 2008 to gather information that would enable the Government to build policies related to female workers.

There have been few changes in the three years. Nearly 36 per cent of the women in the construction, textiles and garment industries had to work at least two extra hours a day.

"Working overtime may be the o­nly practical way to earn extra money because our wages, which are about VND1.4 million (US$72) per month, are not enough to cover our daily needs," said Vu Hong Ngoc, a worker from Minh Tri Ltd Company based in .

"That's why at the end of the day, we have no time left for leisure activities, such as watching TV, reading books or doing sports," Ngoc added.

According to the survey, o­nly 10 per cent of female workers played sports while 67 per cent of them went through life unable to afford radios or newspapers.

"How can they possibly be supposed to enjoy life if more than 43 per cent of them are living in rented accommodation that fails to meet minimum hygiene conditions?" asked Hong.

Hong said the women's daily routine literally evolved around production lines. Even the opportunity for them to acquire knowledge of labour laws was low.

That had led to a situation where many enterprises had ignored certain provisions of the labour contract or embedded in them provisions that were impractical.

Hong said most employees were completely ignorant of the situation. Violations of female workers' rights mainly related to maternity and sick leave.

For example, several enterprises have a rule that if female workers have to take leave of absence to take care of a sick child, the request must be submitted 30-40 days in advance.

If this is not done, the workers can be dismissed.

"This is so absurd. Fancy requiring a mother to know a month in advance when her child will be sick to be able to stay home from work legally," Hong said.

This is meant to be used to cover expenses emerging from hiring female workers and to offer preferential loans at low interest rate.

It may also be used to provide female workers with vocational training, building kindergartens - and expenses related to maternity leave.

However, in practice, unprofitable enterprises often skip setting aside this money.

And, strangely, the survey revealed that two-thirds of enterprises eligible to apply for these benefits, claimed not to know about them.

Hong said educating female workers about work-related laws that affected them was an urgent matter for trade unions.

"The important thing is how the law can effectively protect women's rights,"she said.

A recent dialogue was held between female textile and garment employees and employers by the union and the Ha Noi Trade Union's Centre for Legal Consultancy.

Nguyen Thi Hien a worker said: "Thanks to the dialogue, I and other colleagues are now able to grasp a bit of necessary knowledge about how to calculate extra time, annual leave and wages that should be paid during maternity leave and for social insurance."

Director of the centre, Nguyen Thi Thao, said the meeting was held because of a huge demand for the implementation of relevant laws by workers.

More meetings would be held in the future to strengthen the ability of women in each particular industry to defend their rights.

Dao Lan Anh, head of the union said: "In the past two years, more and more companies have applied new technology to reduce risk and hard work. This has led to a decline in the number of labour accidents and workers suffering from occupational disease over the last two years."
— VNS