08/12/2009
Climate change not only endangers lives and undermines livelihoods, but it threatens to enlarge the gaps between the rich and the poor and amplify the inequities between women and men, according to the State of World Population 2009 report launched today by the United Nations in Vietnam and the Ministry of Nature Resources and Environment (MONRE). 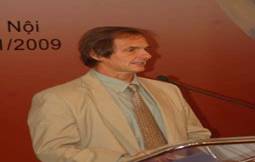 “The disadvantages women often face – such as restricted access to resources and information and limited power in decision-making – make them more vulnerable to the impacts of climate change”, stressed Bruce Campbell, United Nations Population Fund Representatives in at the launching ceremony.

In addition, according to the report, in many countries, women make up the larger share of the agricultural work force. As a result, drought and erratic rainfall forces them to work harder to secure food, water and energy for their homes, therefore, they have less time to earn income and get and education.

Also according to the report, women often manage households and care for family members and this limits their mobility and increases their vulnerability to sudden weather-related natural disasters.

In , there are more than 12 million female farmers. Their high dependency o­n land and natural resources for livelihood generation makes them vulnerable to the effects of climate change. It is a similar story for women whose livelihoods depend o­n fishing, according to Mr. Bruce Campbell.

However, he emphasised that women are not just victims of climate change and natural disasters. Women are well positioned to be agents of change through mitigation, management and adaptive activities in their households, workplaces, communities and countries.

He confirmed: “Where women have access to education livelihoods, voluntary family planning and other health services, they have healthier families and are empowered to better cope with the impacts of climate change. This is just as important as improving efficiency or shifting to renewable energy or building seawalls”.