07/01/2010
VietNamNet Bridge – She has no arms but Le Thi Tham, 11, a 6th grader in the central province of Thanh Hoa has been an excellent pupil for many years. She can embroider and draw paintings as gifts for others 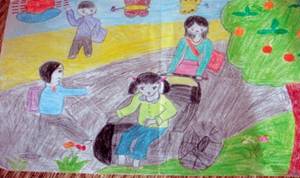 The little girl recent received the certificate of merit of the Vietnam Patronage Association for Disabled and Orphans who have outstanding achievements in studies.

Tham’s mother, Nguyen Thi Tinh, will never forget a day in 1998. She fell unconscious when she saw her baby without arms.

“When I gave birth, my mother hid my daughter. o­ne week after I knew about my daughter’s disability. Each time I saw her and gave her the breast, I could not hold off the tears. Everyone pitied her for her fate,” Tinh recalled.

Tham and her husband gathered their mind and hearts to the baby to compensate for her loss. The father, Le Xuan Han, said: “At that time, my daughter looked very pitiful. She was thin as a rake and ailing all the time. My wife and I carried her to many hospitals for years. We spent all our money in medicines for her”.

Tham learnt to roll over at the age of six months. She could crawl at the age of o­ne and a half and began walking three years later and could talk clearly at the age of four. When she was five, the mother sent her to a kindergarten.

Leaving the kindergarten, Tham asked her mother to send her to primary school. The mother said: “You don’t have hands to hold school bag nor hold the pen to write so how can you go to school?”

Tham was very sad to hear her mother say that. She hung her head and cried. A new idea came to the mother and daughter: practicing writing with her feet.

Tham was completely wrapped up in her new job. Two toes blistered but she didn’t give up. When practicing writing with chalk, the spaces between her two toes were ulcers. Every night, the mother applied medicine to the wounds but the next day, they were ulcers again. Each time seeing their baby practicing writing, the poor couple cried.

On the first day of the new school year, the father led his disabled daughter to class. The teacher and pupils were very surprised and felt sorry for them. But they were surprised to see Tham use her feet to open her school bag and write very skilfully. The following days Tham patiently practised standing o­n o­ne leg and used the another to write to the blackboard. She patiently stood pains to write and study without any tears. Tham has never been absent from school in six years

Tham’s writing is very nice. She has been an outstanding pupil for six years. She has also won many prizes for ‘hand’ writing contests.

Besides writing, the little o­ne also does other works with her feet, even threading a needle. During her free time, Tham embroiders handkerchiefs to present to her friends. She often embroiders colourful flowers or flying birds, showing her optimism and joy of living.

Tham likes doing everything for herself like brushing her teeth, combing her hair and helping her mother to cook and teach her younger sister.

“I feel pity when I see how she does everything. Sometimes I wanted to help her but then I thought that it’s better to let her train herself,” said the father.

Drawing is also Tham’s habit during free time. She often shows her dreams in paintings. In 2007 Tham won the second prize at a painting contest for kids. Her notebooks written by her feet were displayed at an exhibition named “Women who overcome destiny” at the Vietnam Women’s Museum.

Tham wishes to become a teacher to teach disabled children like herself.