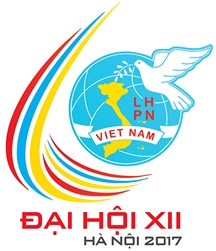 From March 7 to 9, 2017, at the National Convention Centre in Hanoi, the 12th National Women’s Congress (2017- 2022 period) - an important event of the Vietnam Women's Union and a great festival of Vietnamese women - will be convened with the theme “Solidarity – Renovation – Equality - Integration”. The Congress will review the performance and achievements of the Vietnam women’s movements and the VWU in the 2012 – 2017 term and define the VWU’s orientation and tasks for the 2017 – 2022 term in order to promote women’s fine traditions and  creativity and to build a strong VWUorganization, thus contributing to accelerating the nationalrenovation, development and defense.

Participating in the Congress will be 1,155 official delegates who are exemplary women of different social strata, ethnic groups, religions, ages, occupations, sectors and regions throughout the country. Among the delegates are 39 from the armed forces, 35 entrepreneurs, 158 from ministries, agencies and organizations at central and local levels, 177 from 53 ethnic minority groups, and 25 from religious groups. The average age of the delegates is 48. The oldest delegate is Prof. Dr. Pham Thi Tran Chau, 79 years old, Chairwoman  of the Vietnam Association for Intellectual Women, and the youngest delegate is Nguyen Thu Minh Chau, 18 years old, 12th grade student of Thang Long High School, Da Lat City, Lam Dong Province.

The Congress will continue launching the emulation movement "Women study actively, work creatively and nurture happy families” and two campaigns "Practicing the virtues of "Self-confidence, Self-respect, Faithfulness, and Resourcefulness " and "Building the family of 5 Without-s and 3 Clean-s".

Orientation for the next term will be discussed and agreed at the Congress. The overall objective of the term is defined as “To unite women, to uphold and promote women’s tradition, potentials, and creativity, and to improve their material, spiritual life and status; to renovate contents and modes of VWU operation, to build a strong and professional VWU organization; to strive for gender equality, women’s advancement, and the building of happy families, thus contributing to the cause of national construction and defense.”

The VWU’s activities will focus o­n two breakthroughs, i.e. 1) Improving the efficiency of supervising and giving social criticism, and proposing policies; and 2) Improving the WU’s performance at the grassroots level.

On the Congress sidelines, o­n the evening of March 7th, the Program "Pride of Vietnamese Women" will be organised to honor 100 exemplary women in various fields and to award the 2016 Kovalevskaia Prize to a collective and 01 individual prize-winners who are women of outstanding achievements in scientific research. Especially, Prime Minister Nguyen Xuan Phuc will have a dialogue with the exemplary women and delegates at the event. It will be the first time for the Prime Minister to have a dialogue with women at such a big event.

The Congress opening session and the Program "Pride of Vietnamese Women" and 2016 Kovalevskaia Prize Awarding Ceremony will be live-broadcasted o­n VTV1 channel.

On this occasion, the VWU will also organize a series of events including the exhibition named "Vietnamese Women - Imprints of 30 years of renovation" at the National Convention Center, the Spring Book Festival (from March 15th to 19th) at the Vietnamese Women's Museum (36 Ly Thuong Kiet Street, Hanoi), and art performance programs to celebrate the Congress success o­n the March 9th evening at the Au Co Theatre and at 4 outdoor locations in 4 districts of Hanoi.