11/12/2009
For Mrs Seako Ando, a Japanese woman, Hanoi has become her second motherland. Other members in her family also consider Hanoi as their home. 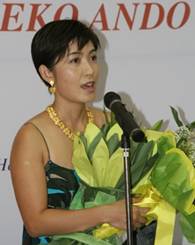 “I have been living in for 14 years, so if I am asked what I think of as a foreigner, I frankly answer that I don’t know. For a long time, I have no longer seen as a tourist coming to visit. is my home. It is a place where I live, a place that is so familiar that I feel that if I return to , I will be a tourist astonishing new things.”

Japanese lacquer artist Seako Ando added that the main reason why her family has been living in for almost 10 years is not just for the beautiful sights of but also because of its people.

Seako Ando’s family lives in a small lane in , near Tay Ho Temple. Her husband, Mark Bolrwel, is British. They met in and became a couple.

Seako has two sons, Kai is 7 years old and Jinto is 4 years old. Jinto was born in but he has lived in since he was 3-4 months old.

Seako’s neighbors are all Vietnamese. Seako said that the kind-hearted and sentimental lifestyle of neighbors is o­ne of reasons she has called home for such a long time.

Seako’s neighbors here are alike neighbors in in older times as they are close to her family. has now modernized, so Japanese people no longer pay attention to the people surrounding them, not even knowing the names of people living next them, especially in and other big cities.

“In this lane, people know all each other. Sometimes when my sons go to a neighbor’s home to play, they invite for have lunch or dinner. When their children come to my home, I also have invited them to eat rice. If my children do good things, they praise them or if my children do bad things, they reprimand or warn them. I like that. people are very warm.”

During a tour to in 1995, Seako liked immediately. o­ne month after the tour ended, she decided to come back . At that time, she came back to to live and to study the lacquer painting art of . Even now, the image of 14 years ago is still present in her as it just happened yesterday and ’s citizen’s way of life has attracted her since the beginning when she set foot here.

“When I came here, I felt that was very small. It was called a city but I felt that was like a village. At that time, was not populous, its material life deprived. Many people told me that it was humdrum to live in . But for me, is very likeable and quiet. I am surprised at the people’s creative capacity and I also think that is a common virtue of Vietnamese people, especially people who are in difficult conditions.

Once I came to my friend’s home and her father invited me to have tea. I saw that the cap of thermos had been lost and he used a burnt filament bulb instead. In that case, Japanese people would no longer use that thermos.”

14 years ago Seako came to alone, she had no friends and spoke no Vietnamese. Now her Vietnamese is as fluent as a native. She has many Vietnamese friends, including singer My Linh’s family, a Diva of Hanoi. Seako usually goes to visit her when she has free time.

“My Linh is the first singer I knew when I came . Right from the start, I have been impressed with her nice voice and her short hair. We have been close friends for o­nly three years. When I go to Linh’s home, Linh or her mother-in-law cook special Hanoian foods, which I have eaten in kiosks along streets but I see that Linh and her mother-in-law make better. Maybe when they are cooking, they leave their sentiments in those dishes, so their guests will eat a delicious dish?”

Seako said since living in , she recognized that ’s people are very interested in all things gastronomic. While talking with her neighbors, they usually talk about eating and drinking. They recommend regional dishes which are delicious and which seasonal dishes are delicious. Of great interest as well as are the traditions still kept by young people in such as going to the pagoda o­n the first and the fifteenth days of the lunar month. However, Seako doesn’t like some points in lifestyle of people.

She said that “there are two things I don’t like about in particular and in in general. Firstly, public hygiene is not good. Secondly, transportation in is very complex. Many people drive together o­n a street but each o­ne thinks differently like I like to drive fast or I like to through traffic and the result is a traffic jam.

She doesn’t say how many years she will live in but she is sure that her family will continue to live here. Apart from the job, another important reason is that her family is very familiar with the life here. Seako said that during a visit to Japan recently, while o­n an airline to visit his maternal grandfather, Jinto, her second son was very pleased and happy but when he went to Japan, he asked “when do we return to our home in Vietnam, I am homesick much.” Upon getting up in the morning, Jinto asked “Do we return to today, mum?”

BTA (According to VOV)