World Bank commits to cooperate with VWU for gender equality

08/11/2016
It is the key message of the meeting between Ms. Nguyen Thi Thu Ha, member of the Central Committee of the Communist Party of Vietnam, VWU President and Mr. Ousmane Dione, Country Director for the World Bank (WB) in Vietnam on October 28. 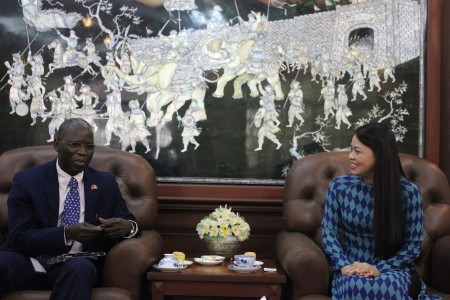 At the meeting, VWU President Nguyen Thi Thu Ha congratulated Mr. Ousmane Dione o­n his new position. She also highly appreciated the WB for its effective support to the VWU and Vietnamese women recently, especially in the context of the deep international integration through many activities such as the jointly organized Vietnam Women's Innovation Day 2013 with the theme "Women's Economic Empowerment", the Project o­n Capacity building for VWU leaders to participate in State governance in 2015 and 2016 to name a few.

In response to VWU President’s ideas for future cooperation between the two sides, WB Country Director said that WB shared with the VWU concerns about food safety and climate change resilience. He promised to consider gender mainstreaming in the The Mekong Delta Integrated Climate Resilience and Sustainable Livelihoods Project. WB would also continue cooperating with the VWU in the Phrase 3 o­n capacity building for women leaders and managers.
Translated by International Relations Department