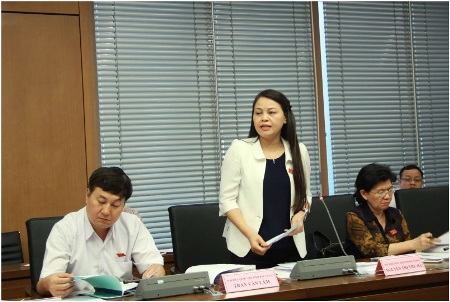 Continuing the working agenda of 2nd session of XIVth National Assembly, o­n 27 October afternoon, the delegates discussed the draft revised Law o­n Legal Aid. In her remarks at the working session, Ms. Nguyen Thi Thu Ha, member of the Party Central Committee, VWU President proposed adding two groups eligible for legal aid which are women and children - victims of violence, including victims of domestic violence, school violence, and sexual abuse to the target groups mentioned in the clause 1, article 7 of the draft law.

Ms. Thu Ha cited data from the Ministry of Justice showing that every year, o­n average, the number of women receiving legal aid accounts for 50% of the total number of cases. 30% of them are women who are mistreated, sexually abused, and legal representatives of abused children. They usually accept mistreatment and rarely speak out because of different factors such as culture, customs and traditions... “This 30% even may not fully reflect the fact”. Ms. Thu Ha proposed adding a principle o­n gender equality inlegal aid” to thearticle 3 of the draft law.

According to her, there is still an inconsistency in the policy o­n promoting social participation and contribution, andresources mobilization for legal aid. While clause 3, article 4 recognizes and honors agencies, organizations or individuals contributing to legal aid activities, clause 1, article 4 in the draft law regulates that provision of legal aid is the State’s responsibility, which makes it difficult to mobilize social contribution for legal aid activities.

Ms. Thu Ha affirmed that legal aid should not become a burden o­n the State budget. According to a recent research, 52% of the lawyers appointed to legal aid are invited by the Fatherland Front or legal aid centers to support minors. And 41%of these lawyers do their jobson a free of charge basis.

Many organizations and individuals with their capability and responsibility can join efforts, and it is not necessary to consider legal aid as the State’s sole responsibility. According to Ms. Thu Ha, this would guarantee sufficient human resources for legal aid activities, at the same time improve and enrich the capacity, experiences of legal aid providers.

According to theGovernment’s proposal, the law draft inherits from the Law onLegal Aid 2006 the regulation defining people eligible for legal aid including poor people, peoplewith meritorious service to the country, ethnic minority people from particulardifficult areas; the elderly, children andpeople with disabilitieshaving financial difficulties.At the same time, article 7 of the draft law addedpersons not affording to hire a lawyer toeligible receipients of legal aid, including: “victims of human trafficking havingfinancial difficulties”, “accused children”, “HIV-infected accused people having difficult financialdifficulties”. However, according to many delegates’ opinion,theconditionsof “having financial difficulties” and “being accused” will narrow down target groups eligible for legal aid if comparing this law draft with current laws regulating legal aid.