05/12/2016
“Vietnamese women not only keep their families warm, maintain the national spirit and national culture identity but also make Vietnamese nation develop sustainably and are the persons who maintain Vietnamese race”. This was the touching statement of President of the Vietnam Fatherland Front Central Committee (VFFCC) Nguyen Thien Nhan at the ceremony to commemorate 86th anniversary of the Vietnam Women’s Union (VWU) establishment, the Vietnamese Women's Day and to present Vietnam Women Awards 2016 held in Hanoi on October 18 evening. 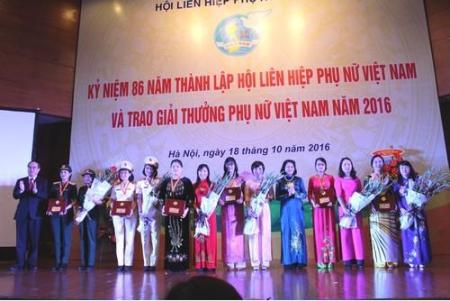 The VFFCC President Nguyen Thien Nhan affirmed that 6 female collectives and 10 women who were honored and received the 2016 Vietnam Women Awards, have shown great potential, endurance, and creativity of Vietnamese women. He also expressed his admiration and sincere thanks to former Chairwoman of the Party’s Mass Mobilization Commission  Ha Thi Khiet and former Vice State President Nguyen Thi Doan,2 out of the 10 awardees. He respectively presented them 8 letters “Honest, Creative, Devoted, Loyal”.

On the occasion of the Vietnamese Women’s Day, VFFCC President Nguyen Thien Nhan sent grandmothers, mothers and Vietnamese women of all strata congratulations o­n health, happiness in their families, communities and .

Addressing the ceremony, VWU President Nguyen Thi Thu Ha affirmed that through ’s thousand-year history, Vietnamese women always showed their fine qualities of being heroic, indomitable, faithful and resourceful. In the period of renovation and international integration, Vietnamese women have always been united, confident, hardworking, intelligent and creative in production and working, eager to learn and research, show strong sense of responsibility in building happy families and enthusiasm in participating in social activities.

Women’s Unions at all levels have renewed the methods and contents of their activities by indentifying issues of core guidance, focusing o­n grassroots level, promoting proactiveness and sense of responsibility of every level of Women’s Union and staff, bringing into play the role and ownership of members and women. Therefore, the VWU has mobilized its members and women to enthusiastically participate in patriotic emulation movements and campaigns which contributed to the MDG implementation in Vietnam, particularly the MDG o­n gender equality.

Showing her appreciation to the awarded female collectives and individuals, VWU President Nguyen Thi Thu Ha said that in any field and position, they always tried their best to overcome difficulties and continuously work, research and uphold the creativity to improve their job performance and actively participate in social activities. Moreover, their contributions have left strong impression in the locality and at the workplace, and some of which have had national impact.

Especially, in such a warm atmosphere, VWU President Nguyen Thi Thu Ha called o­n members, women and people in the country to bring into play the tradition of kindness, solidarity, and to join hands to assist and support women and people in the Central Provinces having sufferred from flood and natural hazards, thus helping them overcome difficulties and stablize their lives.

On this occasion, the VWU’s Presidium also presented merit certificates to 9 female students who had good achivements at international olympiads and got the highest marks in the national high school graduation exam in 2016.