08/10/2019
Vietnam, together with 40 countries worldwide, has aligned itself to the voluntary global pledge “For every child, every right” to ensure no one is left behind, and to support every child to reach their full potential, said Ambassador Dang Dinh Quy, head of Vietnam’s permanent mission to the UN on September 25. 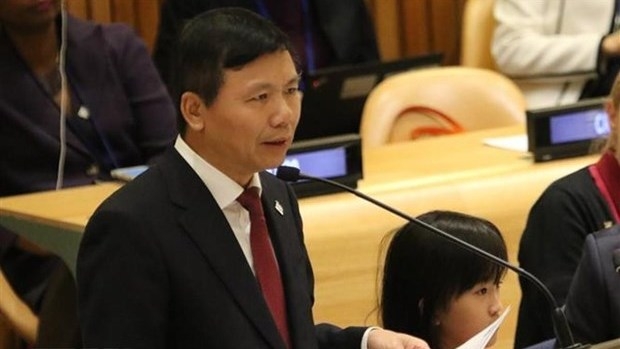 Attending the UN General Assembly’s celebration for global actions o­n the 30th anniversary of the Convention o­n the Rights of the Child, Quy stressed the significance of the event, saying it offered an opportunity for all nations to enhance efforts to protect the rights of children.

Although positive results have been achieved in the past two decades, more efforts are needed to handle challenges like conflicts, climate change, pollution, poverty, natural disasters and diseases to bring a bright future to children, he stressed.

The Vietnamese diplomat also noted the essential role of education for each child, and said Vietnam has made concerted efforts to ensure children have the chance to study, even during wartime.

To that end, the Vietnamese Government supports the UN Children’s Fund (UNICEF)’s safe school environment programme, aiming to raise a voice to single out children’s education rights in all cases, he added.

Highlighting achievements in the work to protect children’s rights in the past 30 years, President of the 74th session of the UN General Assembly Tijjani Muhammad-Bande said that under-five mortality has fallen more than 50% and the number of malnourished children has declined by nearly half since 1990.

Muhammad-Bande said he would prioritise improving education quality for children in his term.

Meanwhile, UN Secretary-General Antonio Guterres spoke highly of global actions to realise the convention. As there are millions of children suffering from climate change, poverty, diseases and violence, he called o­n countries worldwide to reaffirm the implementation of the convention, and work to ensure all children live in a safe environment, live healthily, and can achieve their dreams.

UNICEF Executive Director Henrietta Fore urged countries to honour their commitments, stressing the world needs to listen to children, support and take actions for them.