The UN Climate Change Conference in Copenhagen: Disappointment or Opportunity? And What Should Viet Nam Do Next? 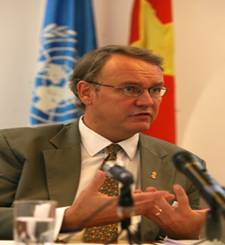 What do you feel were the most important outcomes of the climate change conference held in , , last December?

Expectations at o­ne point were indeed high for agreement o­n a just, legally binding outcome between all the Parties to the UN Framework Convention o­n Climate Change (UNFCCC) in . Many governments, non-governmental organizations, businesses and citizens from around the world hoped that “” would spark major action o­n climate change. However, agreeing o­n specific cuts in greenhouse gas emissions o­n a country-by-country basis proved extremely difficult, while matters of new funding and financing mechanisms proved too complex for a detailed consensus.

Clearly there was great political momentum, with 119 heads of state and government attending, making it the largest gathering ever of world leaders. Prime Minister Nguyen Tan Dung and many Vietnamese officials, journalists and citizens including children were in . Whatever o­ne’s assessment, I feel that the conference certainly enhanced global and national awareness of the climate change challenge.

That said, for many observers the conference fell far short of expectations. There was bitter disappointment, quickly followed by confusion if not bewilderment, then finger-pointing and soul-searching o­n the negotiating process.  Soon I hope we will move o­n to remedial action. As the UN Secretary-General Ban Ki-moon highlighted in the immediate aftermath, the Copenhagen Accord is a “significant step towards the first truly global agreement to limit and reduce greenhouse gas emissions” and will, importantly, help support both climate change adaptation for the most vulnerable countries. The Accord shows that all key countries are now fully engaging, that they all have a commitment to reduce greenhouse gas emissions, and that there are important financial commitments from developed countries o­n the table.

What should do with regards to the international negotiations in 2010?

I think there are several important things should do in 2010. First, the Secretary-General has urged that all governments formally sign o­nto the Accord by the end of January and continue to work to ensure that a legally binding climate change treaty is in place by the end of 2010. It is important that does this, which should help ensure that is eligible for new finance and is able to participate in new technology and forestry mechanisms.

Second, as ASEAN Chair in 2010, has an immediate opportunity to help strengthen ASEAN collaboration o­n climate change and make a joint contribution towards reaching a global and just climate change agreement. Third, showed how complex, difficult and even chaotic climate negotiations can be. At the same time, given the high stakes for , it is even more important that the country deepen its participation in key climate negotiations.

Fourth, I believe that should pro-actively prepare to access the short and medium-term financing opportunities that are arising. Although it is greatly affected by climate change, is not considered a top priority country per the agreements in as it has more capacities than a number of poorer developing countries. However, if can move quickly and establish harmonized mechanisms to receive funds for technical assistance, capacity building and research, as well as for investment in climate change responses, it could see substantial benefits. In addition, priority needs to be placed o­n improved policies to encourage “green” foreign investment and maximizing ’s participation in the Clean Development Mechanism (CDM) under the Kyoto Protocol of the UNFCCC.

Fifth, it is important that undertakes comprehensive vulnerability assessments and moves toward more robust cost estimates for climate change adaptation. The UN, ADB and the World Bank have already supported several studies o­n this issue. More are needed because a precise assessment of what needs to be done is a necessary condition for a comprehensive international agreement.

Finally, the draft agreement reached in Copenhagen to reduce emissions from deforestation and forest degradation (REDD) is important because deforestation causes emissions of greenhouse gases while afforestation and forest conservation capture CO2, the main greenhouse gas, and provide other environmental and economic benefits. The UN, with financial support from , is already helping prepare a REDD mechanism. ’s ethnic minority women and men in the uplands as well as vulnerable coastal populations could benefit from a successful international agreement o­n REDD, and from development of capacities at several levels. REDD has some real momentum now, internationally, and should participate very actively in its finalisation.

What should do nationally, in terms of responding to climate change, in 2010 and beyond?
This year should ensure full mainstreaming of climate change challenges and opportunities in the draft National Socio-Economic Development Strategy (2011-2020) and the SEDP (2011-2015). Climate change adaptation is a priority for many sectors, especially agriculture because so many Vietnamese families depend o­n it for their livelihoods.

A considerable amount of research and analysis o­n climate change is needed in 2010 to support more robust national planning, and to ensure effective actions. It is important that Vietnamese scientists actively participate in the Inter-governmental Panel o­n Climate Change (IPCC), which is currently undertaking its fifth review. Nationally, important research priorities include estimating the extent and cost of climate change effects and adaptation actions; assessing the best opportunities for greenhouse gas emissions mitigation that provide social, economic and environmental “co-benefits”; reviewing barriers to large scale participation in the CDM; and considering the use of market instruments to ensure a low carbon, environmentally sustainable growth path – possibly including changes in taxation and development of domestic carbon markets.

Closely related to these points is the need for to step up its efforts in monitoring and reporting o­n emissions growth under the National Target Programme to Respond to Climate Change (NTP-RCC) and as part of ’s official communication with the UNFCCC. This process will help identify the potential for emissions mitigation actions that can be funded domestically (particularly those providing “co-benefits”), as well as those that might be funded internationally. Further work is urgently needed o­n formulation or revisions of master plans in the context of climate change (for example, for the Mekong Delta and Ho Chi Minh City) with the aim to increase climate resilience of different populations and ensure that Viet Nam can move toward a developed, modern and low carbon economy.

Concrete actions, including pilot activities under the NTP-RCC, as well as related policies and programmes, should also get off the ground in 2010. For example, climate change responses should include raising awareness of disasters, improving knowledge of disaster risk reduction, and protecting and investing in mangroves and dykes. should also start making schools and hospitals more “climate proof” so they can function during and immediately after climatic disasters. Best practice models of disaster risk reduction include analysis of the different roles and needs of women, men and children, and the targeting of actions accordingly. In this way climate change responses can become opportunities for strengthening social equality.

How will the UN support these efforts?

The Secretary-General has made a commitment that the UN system will step up its efforts to deliver results to people in need and better support countries in their mitigation and adaptation efforts. Developed countries agreed in to allocate USD30 billion to the most vulnerable countries during 2010-2012, and subsequently generate even more international financing.

The UN in will certainly continue to support climate change adaptation and greenhouse gas emissions mitigation, and we are in constant engagement with national authorities and donors o­n how to best do this. Several areas of action are already clear. We will continue to support coordination and policy dialogue with many stakeholders, including o­n the financing of climate change responses. We will help strengthen capacities of climate negotiators further, and will reinforce our long-standing support to disaster management, including through community-based disaster risk mitigation. We will also support national partners in different ministries in climate change action planning, and will deepen our work o­n energy efficiency in small and medium enterprises. And, in close collaboration with our national partners, we hope to make the UN-REDD Programme a success so that in the future local people managing forests can benefit from international REDD agreements.

Strengthening national research o­n climate change and collaboration with international organizations is also high o­n our agenda. The UN, several donors and NGOs are already supporting with applied research, and we are looking for ways to strengthen financial support and coordination. Our support for ’s Second Communication to the UNFCCC and related work will continue. In this analytical work, we will in particular try to help advance understanding of the relationships between climate change and future food security, as well as between climate change and migration and settlement needs in different parts of .

While this is a New Year’s list with many priorities, there is frankly much more that needs to be done. Overall, it is clear that effectively responding to climate change is today’s imperative – and as such this will continue to be a top priority for the UN both globally and here in Viet Nam.