10/08/2020
That is the purpose of the meeting between VWU President Ha Thi Nga and Mr. Tanee Sangrat, Thai Ambassador to Vietnam on the morning of July 23rd 2020. 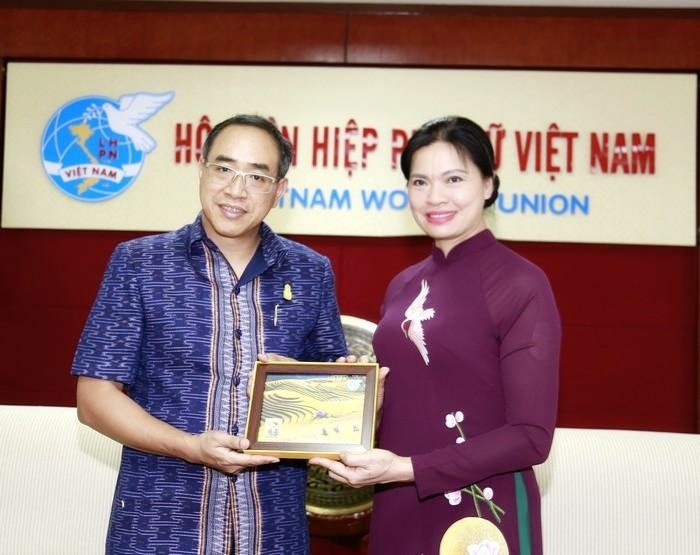 VWU President and Thai Ambassador at the meeting

At the meeting, VWU President Ha Thi Nga conveyed her thanks to the Ambassador and his spouse for having attended performance “Ao Dai - Vietnamese Cultural Heritage” organized by the VWU and the Ministry of Culture, Sports and Tourism at the Temple of Literature recently.

She briefed the Ambassador of VWU main activities in 2020, including the 90th anniversary of VWU foundation on October 20th and its contribution to the Party Congresses by introducing women candidates to be elected to Party Secretariats at all levels.

Speaking highly of the cooperation and exchanges between Thai and Vietnamese women, VWU President shared that many VWU delegations have been sent to Thailand for study tours and workshops.

Knowing that the Ambassador is experienced in organizing culture and sports exchange activities, which are also VWU strengths, President Ha Thi Nga hoped that Mr. Tanee Sangrat would promote cooperation between women the two countries through such activities. Especially the two sides could learn from each other in supporting women in economic development, including community-based tourism and national culture preservation.

Furthermore, both sides highly appreciated the role of women in UN peace keeping forces as women peace keepers could effectively contribute to the local community development and introduce their national culture to the host countries. Images of the Vietnamese women peace keepers are being introduced widely in the media, highlighting women’s capacity and contribution in general.

The Ambassador expressed his willingness to cooperate closely with the VWU and invited VWU leaders to attend the Embassy’s upcoming events. He also explored possibilities of supporting ethnic minority women in the Northwest and Northeast regions of Vietnam. VWU President Ha Thi Nga invited him to a field visit in these regions and learn about VWU’s program “Supporting women in border areas”, which aims at improving the knowledge and skills of ethnic minority women, promoting their roles in preserving cultural heritages and in economic development.