03/02/2020
Since its foundation in 1930, the Communist Party of Vietnam has always listened to the people’s aspiration for independence, freedom, happiness and prosperity. 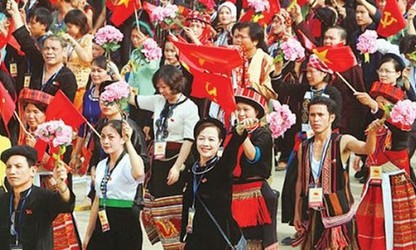 The Party guidelines with the leading ideology of national independence and socialism have boosted national development and met people’s aspirations. Thanks to the Party’s correct guidelines together with sacrifices and efforts of Party members, the Communist Party of Vietnam has rallied and promoted national unity.

Mr. Phuc said “Throughout the past 90 years, in any period or circumstance, the Party has always exploited the strength of national unity in combination with mobilizing external resources, seizing opportunities and pushing back risks. They are the lessons of the Vietnamese revolution.”

The strength of the Party is based on national strength, so enhancing national unity has been is crucial to the Party over the past 90 years. The 12th National Party Congress affirmed that boosting national unity was the strategic guideline of the Vietnamese revolution, the engine and great resource for national construction and defense.

Associate Professor Doctor Bui Xuan Duc of Dai Nam University says the Vietnamese revolution led by the Party is inseparable from the people’s support and contribution. More than ever, the Party needs to demonstrate its role in uniting people.

Mr. Duc said “Great national unity needs to be based on harmonizing members in society. Great unity means great unity in politics and in the revolutionary cause. The ruling Party needs to unite all forces for great unity.”

The Communist Party of Vietnam is the ruling Party, the only leadership Party that gathers representatives of all social strata. Therefore, all the Party guidelines, policies and State laws need to serve the people’s interests and aim at strengthening national unity.

Pham The Duyet, former President of the Vietnam Fatherland Front, said that the Party needs to bring into play its role as the nucleus of national unity and nation defense.

Mr. Duyet said, “In order to promote the strength of national unity the Party, particularly the Party Central Committee, needs to stay united and set example for Party Committees at the grassroots level to follow. The people want the Party to realize its directions and resolutions and only by so doing, can the Party use national unity to successfully implement national industrialization and modernization.”