06/11/2020
68 excellent projects were awarded with more than 8 billion VND at the Contest “Women Start-up - Successful Connection”. The award ceremony took place in Hanoi on October 13rd with the attendance by Deputy Prime Minister Vu Duc Dam. 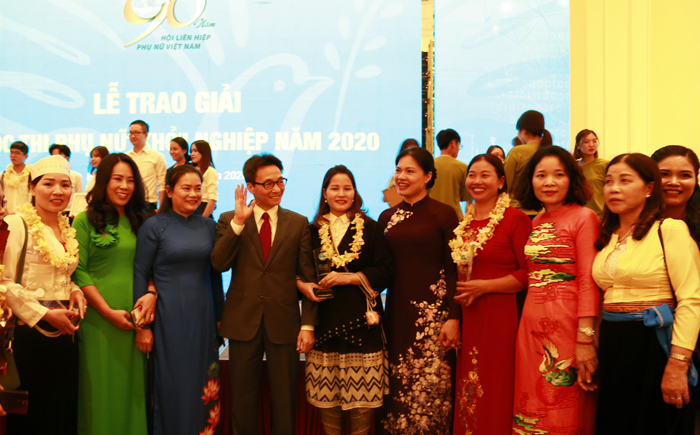 Speaking at the ceremony, VWU President Ha Thi Nga acknowledged the innovation and successes achieved by the Program “Supporting women to start up” in the 2017 – 2025 period, which was part of the national start-up movement and was assigned to Vietnam Women Union by the Prime Minister. After 3 years, 46,825 ideas and projects have been presented to the start-up contests, and 38,415 women have been supported in starting up businesses.

Although the 2020 Women Start-up Contest took place in the COVID 19 situation, it received enthusiastic responses from various women groups with the number of projects 1.3 times higher than in 2019.

This year's Contest emphasizes creativity and connectivity. All the projects awarded at the regional and national levels involve connection between scientists and farmers, producers and consumers, and among members of the economic models. The projects also ensure clean, green and safe production and technology application to develop OCOP products in connection with sustainable poverty reduction.

Especially the contest maximized application technology. Introductory clips made the presentation more lively, attractive and creative. The projects grading was conducted online by judges both in Vietnam and overseas.

The contests attracted the participation by 922 authors; and 68 outstanding projects, 23 projects by disabled women and 10 projects by female students were honored and awarded.  According to President Ha Thi Nga, awards worth more than 8 billion VND would be given to projects in different fields.

At the ceremony, Deputy Prime Minister Vu Duc Dam affirmed that Vietnam Women Union always had many practical activities for women, and many Government programs would not be completed without VWU’s close cooperation. The Deputy Prime Minister also emphasized: “No one can enrich Vietnam on behalf of the Vietnamese people, so we must arouse the spirit of women to overcome all difficulties , transcend yourself, get rich rightly, set up a career for yourself and contribute to the society.”

The Deputy Prime Minister also reaffirmed the Government’s commitment to accompany and support the Vietnam Women Union in the women start-up movement.