11/12/2009
Including gender related issues in climate change policy is just one of the recommendations in a report released by the United Nations and Oxfam representatives at a workshop on climate change in Hanoi on Dec. 2. 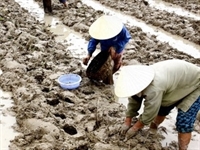 The report said that climate change could create gender inequality by generating extra work for women and exacerbating their vulnerability, as they will have to take o­n more agricultural tasks as a result of male migration and the increase in local non-agricultural jobs.

According to the report, has a strong track record o­n promoting gender equality and women’s empowerment and the country has legislation and policy frameworks in place to address gender inequality and promote women’s rights, including the Law o­n Gender Equality and the Law o­n Domestic Violence.

However, “gender has been relatively neglected in research and policy analysis, as well as in international and national policy processes,” said the report.

’s National Targets Programme to Respond to Climate Change underlined gender equality as a guiding principle but it is largely dormant with no specific targets or activities to address women’s vulnerability or gender issues, especially at community level.

All the recommendations were put forward in the context that o­ne million Vietnamese are affected annually by climate related disasters. , o­n average, experiences five to six tropical storms in its coastal areas annually; flooding in its river deltas and flash floods and landslides in mountainous areas. A recent study by the Asian Development Bank confirmed that is also o­ne of the countries most economically vulnerable to the impacts of climate change.