03/11/2020
On October 18, the Vietnam Women's Union (VWU) held a ceremony to mark its 90th founding anniversary (1930-2020) and convened for its 4th Patriotic Emulation Congress via an online platform in Hanoi, Lam Dong and Can Tho. 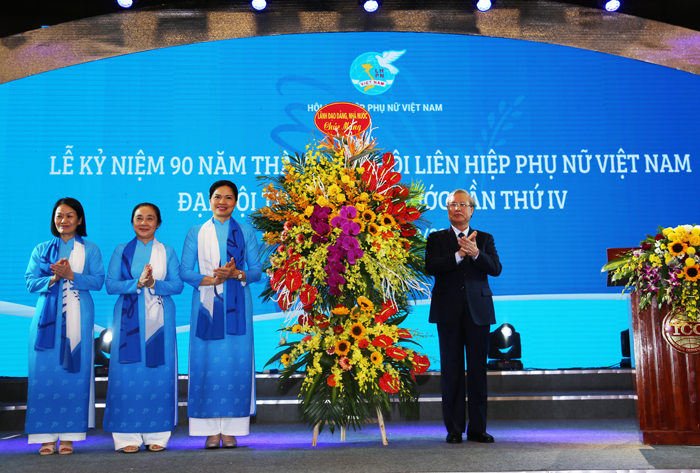 Before that, the VWU paid a visit to the Uncle Ho's Mausoleum to report its achievements over 90 years.

Speaking at the opening, VWU President Ha Thi Nga expressed that under the leadership of the Communist Party of Vietnam and President Ho Chi Minh, throughout the 90-year history, the VWU is increasingly growing and developing, affirming its vital position and role as a pioneer organization for equality and development of women in Vietnam, contributing for national economic, political and socio-cultural development.

Addressing the event, Politburo member and permanent member of the PCC Secretariat Tran Quoc Vuong applauded the efforts and contributions made by the VWU to the country’s construction and development over the past nine decades.

The immense sacrifices and dedication of the Vietnamese women generations and the glorious achievements of the women's movement as well as the VWU's activities made great contributions to strengthening the national history, he added.

He also stressed that the country is now facing significant challenges from the complicated developments of the COVID-19 pandemic, requiring the entire country to perform multi tasks in the same time, including containing the pandemic, resuming economic activities, and stabilising the livelihoods of the people, particularly women and children.

He asked the VWU to renovate its communication and educational activities in order to raise public awareness of gender equality and women’s role in the country’s revolutionary cause and to effectively implement emulation movements while making further progress in caring for its members and supporting disadvantaged women, including those with disabilities, ethnic women and those living in remote and border areas.

On this occasion, the VWU was honored to receive the State's noble reward - First Class Labor Medal, recognizing its effective contributions to the country's development in recent years.

In the framework of the event, the 4th VWU patriotic emulation congress honored 335 typical collectives and individuals and prized 2020 Vietnam Women’s Award to 7 outstanding collectives and 10 individuals that have contributed significantly to the country's development in all fields.

Also at the ceremony, in order to promote the spirit of "good leaves protect tattered ones", responding to the calls of the PCC General Secretary - President and the Prime Minister, the VWU mobilized to support people in the flood-hit areas of the central region. Previously, in a short time, the VWU at all levels raise nearly VND 5.5 billion in cash and goods to support Central region.