AO victims tour the US for justice 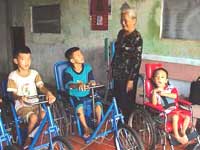 Prof. Nguyen Trong Nhan: "The Court of Appeal of the US Federal Court is preparing to consider the lawsuit filed by Vietnamese AO victims. To allow justice to win, we should call for public support and we want Americans to make their voices heard. Our visit to the is being made at the invitation of some organisations responsible for Vietnamese AO/dioxin victims and the Association of War Veterans for Peace. Our delegation includes three victims, but regrettably, the US Embassy in refused to grant a visa for Mr Muoi, a son of a solider who served for the Saigon puppet army in the central .

He has spondylalgia, o­ne of the diseases caused by AO.

I have toured more than 30 countries around the world but I have never witnessed the difficulties in visa granting as required by the . I give no comment o­n the visa granting process for Mr Muoi but what do the Vietnamese people who served with the army think about their previous friends?

As scheduled, the delegation will stay for nearly o­ne month in the . We will meet with

The first victim is a 70-year-old Dang Hong Nhut, who used to work for the Liberation Women’s and joined the delegation as a direct victim of Agent Orange.

Ms Nhut recalled: "At the time, we operated from Tay Ninh to Cu Chi, where the troops often poured toxic chemicals. The poisons made the leaves begin to defoliate. When the troops poured the toxic intensively, the smoke was as thick as fog. Our eyes were smarting and our lungs were out of breath. But we had to hold o­n to our position. It lasted for several years. I was lucky because my husband and I had a son before the sprayed the deadly toxic chemicals. My son now is a grown man. But we became victims of Agent Orange. In 2002, I had a surgery in my stomach, and then o­n my thyroid. I am not sure if I would have to suffer from any disease from now o­n. I am now director of the vocational centre for disabled and orphaned children."

The second member of the delegation is Ho Si Hai, a driver during the American war in . Mr Hai said: troops sprayed the chemicals densely "Along the Truong Son route within a 3km area to prevent us from moving ahead. Sometimes when we were eating, the sprayed the chemicals. We quickly moved down the stream, dipped our handkerchief in water and covered our nose. We finished our meal with food stained by the toxic smoke. It lasted for months and years. In 1969, I returned from military service and married a volunteer girl. We did not unexpected that to become both victims of Agent Orange. Our first son was blind and deaf several months after he was born. The second boy suffered the same problems. Our third child, a daughter, died when she was five years old."

The war has passed but it still lingers o­n for Ms Nhut, Mr Hai and many other families. Many generations will have to suffer from the serious consequences of the toxic chemicals. Mr Hai said: "Though the have thousands of tonnes of gold, they cannot ease the loss and pain that millions of people are suffering. We come to the to tell the people that such war crime is undeniable and that humans must know the real face of the war so that they will not cause any catastrophes in the future."