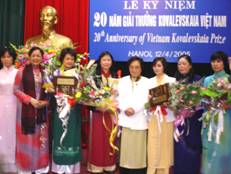 In the remark speech, Madame Nguyen Thi Binh emphasied:”Since its establishment (1985-2005) Vietnam Committee for Kovalevskaia Prize has selected and awarded Kovalevskaia Prizes to 28 outstanding individuals and 12 outstanding groups of the women scientists in Vietnam. The value of the Prize is not much, however it encourages and stimulate Vietnamese womenscientists and increases the pretisge of science performance of Vietnamese women to the world”.

On this occasion, Vietnam Committee for Kovalevskaia Prize organizes the ceremony to award Kovalevskaia Prizes in 2003-2004 to 2 individuals and 2 groups of women scientists who have gained the outstanding achievements in the field of natural science. They are: Prof.Dortor and outstanding teacher Tran Thi Luyen- Vice director of Nha Trang Aquaculture University; Colonel, Associate Prof. Nguyen Thi Thu Ha, Head of Hematology Faculty of the Central Army Hospital 108, Ministry of National Defense; Two women scientists groups of the Polymer Pharmaceutical Unit, Chemical Institute, Vietnam Institute for Science and Technology and of Traphaco Share-Stock Company.