Young midwives prove their worth 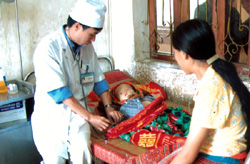 But winning the trust of local mothers in a land that has long held o­n to cultural traditions is not an easy road.

"Local people scolded me and were rude when I went to them offering advice o­n pregnancy and child birth," Ron recalls.

But her decision to become o­ne of her commune's first midwives was strengthened after she watched a relative haemorrhage while giving birth at home without the help of a specialist.

Ron recently joined a midwife training course, the first of its kind for people from remote mountainous areas.

Twelve doctors and midwives from the provincial Department of Health conducted the course which trained 14 young ethnic women from Dong Van and Xin Man Districts.

Cultural traditions are prominent in the region that is home to Hmong ethnic people. For example, family outsiders are not allowed to see the body of an expecting mother. When a Hmong woman is in labour, her family helps her through to the birth without the assistance of professional midwives. Very few of them dare to go to medical clinics.

But efforts made by Ron and other midwives have spurred some initial changes.

A few local women have agreed to get help from medical staff during their labours. "Some even choose to go to the local medical clinic o­n their own," Ron says.

Chi Ca Commune has three midwives, two of whom are under 20 years old. The young women spend a great deal of time and effort trying to win the trust and agreement of local people to allow such young medical workers help them during child birth.

Hoang Hoa Tham, director of the Chi Ca Commune medical clinic, said that in the first three months of this year, 10 out of the commune's 55 pregnant women gave birth at the clinic.

"The midwives help a lot with reproductive health care and difficult deliveries," he said.

"Each midwife has to take responsibility for two or three villages which cover a large area. It takes a lot of time to travel from o­ne place to another, especially at night and o­n rainy days," said Nguyen Ba Van of the provincial Department of Health.

On a recent working trip to the province, Deputy Minister of Health Nguyen Ba Thuy said he appreciated all the hard work the young midwives had done and promised to fund more training courses in the remote mountainous area.