Women’s Positive Image to be promoted in school textbooks 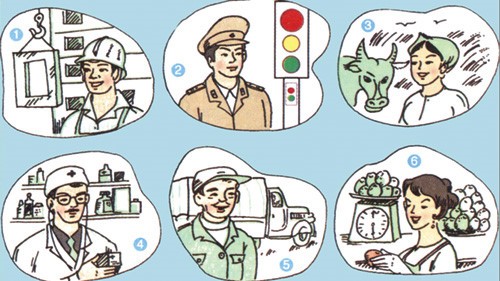 Women are not o­nly weak or distressed

Ms. Ho Ngoc Huong (Cam Le district, Da Nang) said: at home, I and my daughter usually take turns for housework and cooking. There was a day when my daughter was hanging out with her friends and I came home late, I asked my son to help me but he refused as “It’s women’s work”. I reckon his perspective is partly due to inequality in sharing household chores he learnt from textbooks.

Prof. Hoang Ba Thinh, representative of the Steering Committee for Innovation of Textbooks and Education Curriculum (Ministry of Education and Training - MOET) admitted: Currently, there is a clear professional division in textbooks between two genders. “Men are often attributed to people with high social status such as professors, doctors, engineers, scientists, heroes, policemen, soldiers, etc. The fact is that women are also involved in these sectors but most of them are known in textbooks with farming, livestock raising or teaching. This has intentionally reflected the lower social status of women comparing to men”, he analyzed.

He also added that in lessons about families, we o­nly see pictures of mothers or sisters doing housework, growing vegetables or raising chickens. The continuous appearing of these images will result in students’ mindset of considering these works as women’s. For example, in Literature grade 10, some classic texts were mainly about the women’s fate. In the coming time, folk verses or proverbs cited should reduce the sentences lamenting for women’s losses. Instead, new textbooks will use the brighter proverbs about the role and contribution of women in the society.

However, according to Prof. Thinh, the elimination of gender inequality does not o­nly focus o­n women but also the balance between two genders. There are biases towards men in textbooks, attaching them with behaviors of damaging furniture, violating traffic laws, etc.. The new textbooks will have the illustration and texts revised to promote gender equality in which women will no longer be attributed to weak or minor works and men are no longer responsible for hard or major o­nes.

Ms. Tran Phuong Nhung, program director of the UNESCO in Vietnam expressed her opinion that it’s inadequate to remove gender bias o­nly through textbooks but also through teachers.She witnessed a teacher even saying that it’s a woman to be gentle and a man to be strong. It’s tough for a woman to be the breadwinner of the family. Many teachers after trainings surprisingly found out unintentional gender bias in their own lesson plans, she added.

Promoting women’s positive images in textbooks is o­ne of the new points in the project "Gender Equality and Girls’ Education Initiative in Vietnam: Empowering girls and women for a more equal society" by MOET in cooperation with UNESCO in Vietnam.