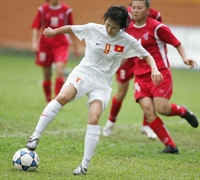 The team received a bonus payment of VND40 million and VND200 million from the Vietnam Football Federation.

and finished second and third and were awarded prize money of VND30 million and VND20 million.