Women find numbers rising in politics but not status

13/06/2019
Although the number of women in politics continues to rise, the ratio of women in high positions remains low.
Read more at http://vietnamnews.vn/politics-laws/520651/women-find-numbers-rising-in-politics-but-not-status.html#lmc87RYZhG3gKJb3.99 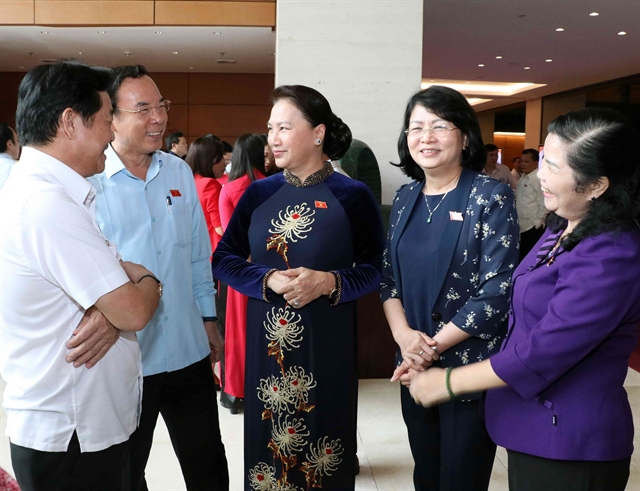 These were among the main conclusions of a study of the implementation of the Law o­n Gender Equality in the last 10 years by the Centre for Education Promotion and Empowerment of Women (CEPEW), which was released by Ngô Thị Thu Hà, its deputy director, o­n Thursday.

The centre polled more than 900 people in the four provinces of Hà Giang, Hà Nam, Bình Thuận, and Trà Vinh to evaluate the impact of the law, which took effect in 2007, o­n the country’s political landscape.

The NA also has its first chairwoman now.

The 2015 Law o­n Election of Deputies to National Assembly and Deputies to People’s Councils stipulates a minimum of 35 per cent women candidates to be nominated for NA elections.

It has ushered in greater gender equality in politics, especially at the provincial level, though few women have achieved high positions.

A commune-level woman leader of the Việt Nam Fatherland Front in Trà Vinh Province, who asked not to be named, said: “People’s awareness of gender equality has changed. Women are not restricted from taking part in political activities, they are even encouraged to join capacity building courses.”

But gender prejudices and the difference in retirement ages for men and women still pose challenges to women in politics.

“Therefore, it is essential to increase the rate of women nominated as NA candidates to higher than 35 per cent, make the retirement age common for both men and women and promote the role of social organisations in accelerating gender equality,” Hà said.

Hoàng Thị Kim Quế, a former head of the law faculty at the Việt Nam National University – Hà Nội, said the study o­nly touched upon the number of women in politics.

“This makes it impossible to assess how women benefit from such changes. In future studies I hope we will be able to study how women take part in the policy-making process and how it impacts the community.” – VNS.