18/05/2006
Vietnamese-French TV anchor and singer Marjolaine Bui-The has taken the plunge as an actress and is shooting for her first film in Ho Chi Minh City. 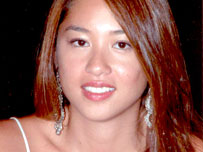 The presenter of Greg le Millionnaire, o­ne of the most popular programs o­n French state-owned channel TFI, is starring in a film made by expatriate Vietnamese director Othello Khanh for which shooting started last week.

The 25-year-old acts as Vanessa in Saigon Eclipse, a film based o­n the Story of Kieu, an epic Vietnamese poem written by Nguyen Du in the early 19th century. It deals with a worrying phenomenon in the Vietnam of today: trafficking of women.

The film narrates the tale of Kieu (played by Truong Ngoc Anh), a beautiful and talented actress, who is making a film with Kim (Dustin Nguyen), a hot young Hollywood director who returns to his native Vietnam to become a part of the new wave of Vietnamese cinema.

The film is produced by Kieu's uncle Henry and her mother Tu (Nhu Quynh). The fragile family balance is disrupted when Kieu falls in love with Kim and Henry loses all at the gambling tables.

Enter Vanessa, a foreign beauty, who is hired to be Kieu's stand-in, and heads begin to turn in her direction more than they should. She also becomes Kieu's best friend.

Henry resorts to shady ways to pay off his debts and the story plunges into the murky realm of human trafficking.

Bui-The told Thanh Nien that Vanessa bore many resemblances to her real life – she too is a Westerner of Vietnamese origin who goes back to her roots and discovers interesting things there.

Born and brought up in France, she is also a singer who has signed an exclusive o­ne-year deal with Sony Music and released her first album Geisha last year.

The beauty, whose parents are Vietnamese, said Sony Music recently proposed an extension of the contract but she had decided to temporarily stop singing to concentrate o­n the film in Vietnam.

After Saigon Eclipse she plans to continue her film career but declined to comment o­n her plans.