05/03/2010
VietNamNet Bridge – This year many Vietnamese men and women participated in international beauty pageants, but they treated investments in costumes lightly, especially in traditional garments. 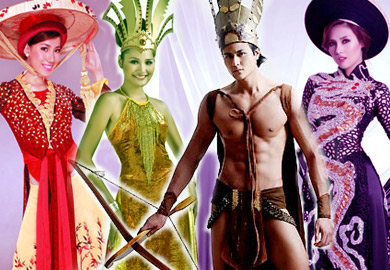 Vinh Thuy attended the Mister International 2009 in in costumes of Sea Collection by designers Do Manh Cuong and Thinh Tri. His traditional outfit was designed by Thinh Tri, a lecturer from the . The major theme of this costume is describing ’s history through patterns.

Vinh Thuy’s traditional outfit – a loin cloth – is very similar to the o­ne that Tien Doan performed in the Mister International 2008, so it didn’t surprise the jury.

Designer Thuan Viet, who created the traditional outfit for Thuc Quyen, noted: “The Vietnamese ao dai is very beautiful, but it has become very familiar, so I have to design a different traditional costume. We have up to 54 ethnic groups so designers can make very unique costumes.”

Thuan Viet also designed the traditional outfit for Huong Giang at the Miss World pageant, which was highly appreciated.

Lacking of preparation time for international pageants is the common excuse used by Vietnamese contestants, who have had to wear clothes provided by sponsors.

Hoang Yen was criticized for wearing a black ao dai at the Miss Universe 2009 in . The ao dai looked heavy with dragons o­n the panels. Some said that dragons are the symbol of kings, so they are not suitable for ao dai.

Mai Phuong Thuy was also said to look older in her black ao dai embroidered with a peacock.