28/04/2006
A charity fair was held in Japan's capital city of Tokyo on April 26, drawing female representatives from 24 member countries. 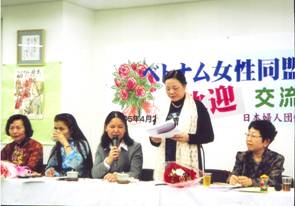 The fair, held annually by the Asia Pacific Women's Association, offers a chance for participants from different countries to acquire mutual understanding of each other's traditions and customs, thus bolstering the solidarity among the people of participating countries.

The money collected at the fair will be sent to the association's fund, and then be allocated to each member country for their domestic charity work, said Mrs. Nguyen Thi Phuong Dung, wife of the Vietnamese Ambassador to .

Part of the cash collected from the fair last year was used to build a kindergarten in Ha Hoa district of the northern midland of , .

Fair-goers were particularly enthralled by the diversity and sophistication of the displayed Vietnamese products, ranging from the tradition long dress or "ao dai" to typical food such as spring rolls, chicken sticky rice, sweet green pea soup, steamed rolls made of rice flour and coffee products.