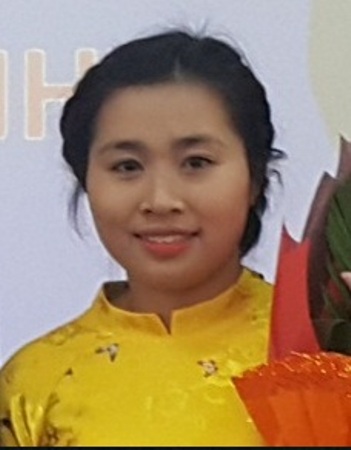 One of the members that gained support from Ms. Huong  is Mrs. Dinh Thi Huong in center 74, TYM’s member since 2010, whose family is a poor household in the locality. Mrs. Huong’s husband is incapable of working; her child suffers from kidney disease, and Mrs. Huong herself is weak. Mrs. Huong has availed loans from TYM to raise chicken and trade eels. However, Mrs. Huong did not have a transport vehicle so her business encountered many obstacles and did not generate much income. Understanding Mrs. Huong’s situations, Ms. Nguyen Thi Huong suggested Dien Chau branch to gift Mrs. Huong a bicycle for the convenience of her trading business. Since then, Mrs. Huong’s family economy has developed sustainably, and the family is no longer the poor household in the region.

Mrs. Hoang Thi Lieu, member of center 105, shall never forget that the little Nguyen Thi Huong came a long way of nearly 15 km from Dien Phuc commune to Dien Yen commune in the rain at dusk to give Mrs. Lieu and her children several dozen kilos of rice and some food. Mrs. Lieu’s family is in difficulty and she plays the main role in her family. Her husband is mentally ill, her mother-in-law is old and weak and her 3 children are still young. At the time when Ms. Huong gave Mrs. Lieu some food, her youngest child was o­nly about 3 or 4 month old. Mrs. Lieu was not working, and she did not have any money left to buy food. Even though Mrs. Lieu did not tell anyone about her hard life, Ms. Huong knew Mrs. Lieu’s hardships by visiting her house. Ms. Huong then helped Mrs. Lieu and her family in a timely manner. Mrs. Dinh Thi Huong and Mrs. Hoang Thi Lieu were two of the members who have received dedicated and practical support from Ms. Nguyen Thi Huong.

In her speech at the annual meeting, Ms. Claire Kelly highly appreciated TYM’s and its staffs’ endeavors and achievements over the past 6 years of cooperation. In the time to come, Whole Planet Foundation hopes that TYM continues to support poor women and develops sustainably.

Year 2016 is the third year that a loan officer from TYM has the honor of receiving this award. This achievement is honorable for not o­nly Ms. Nguyen Thi Huong but also for TYM and Dien Chau branch. It shall help enhance TYM’s prestige and image in the thoughts of TYM’s partners, donors and friends in and overseas.