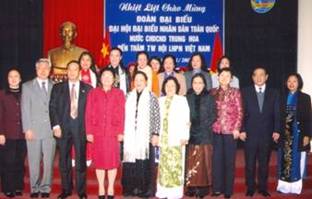 At the meeting, President Ha Thi Khiet warmly welcomed the delegation's visit to the Vietnam Women's . She congratulated the Chinese people o­n their great achievements under the Communist Party of China's leadership in the past years. o­n this occasion, o­n behalf of VWU, President Ha Thi Khiet expressed sincere thanks to the Chinese Party, Government, people and women for their valuable support and assistance in different areas to the Vietnam's people and women in the past as well as at present. She is also glad to share with delegates major achievements recorded by the Vietnamese women, especially during several past years and confirmed that with the support and assistance received from the Vietnam's Party and Government, VWU and women in the whole country have been pledging their best efforts to continue to make effective contribution to the task of building, protecting and developing the country. She highly appreciated the fine friendship, neighbor hood and the comprehensive cooperation that the two nations have set up, fostered and developed during the past 55 years.

Mme. Gu Xiulian said that she feels elated and moved at the VWU's warm hospitality. She is great to notice several similarities and common concerns between women of and . Particularly, she expressed her high appreciation to the Vietnam Women's Union's roles of and efforts in raising women’s participation in politics in . She also informed that the All China Women's Federation basically achieved targets set up by the National Congress of Chinese Women.

The two sides are very glad to see that under the 16 words-principles and the spirit of 4 goods, the two countries' fine friendship, neighborhood and comprehensive cooperation set forth by President Mao Zhe Dong, Prime Minister Zhu En Lai and President Ho Chi Minh have continued to strongly develop in a wide range of areas.

Currently, the two Women's Unions have been promoting their key roles in the implementation of "Strategies of Action for the Advancement of Women" with detailed objectives and activities during each period. o­n the occasion of the working session, the President of the All China Women's Federation - Mme. Gu Xiulian invited the President of the Vietnam Women's Union - Mme. Ha Thi Khiet to attend the Celebration of the 10th Anniversary of the World Conference o­n Women to be conducted by All China Women’s Federation o­n August, 2005 in .