31/01/2005
In the afternoon of 18 January 2005, at the head office of the Vietnam Women’s Union, VWU Vice-President Nguyen Phuong Minh, Editor-in-Chief of Vietnam Women’s Newspaper, on behalf of the leadership of VWU warmly received Madam Kristina Belka, Spouse of the Prime- Minister of the Republic of Poland, on the occasion of the official friendship visit to Vietnam from 15th to 18th January 2005. 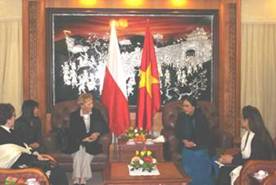 Participating in this meeting are members of VWU Presidium Board, representative leaders from different departments of Vietnam Women’s Union and several carders who had studied and worked in Poland in the past.

Although the visit in Vietnam was short, the visit to the Women’s Museum andVietnam Women’s Union where she had an open sharing with Vice-President Nguyen Phuong Minh, has helped Madam Kristina Belka further understanding the Vietnamese women and Vietnam Women’s Union. In the speech, Madam Phuong Minh also emphasised o­n the previous traditional relationship between women and Women’s Union in Vietnam- Poland and wished that Madam Kristina Belka would be acting as a bridge to strengthen this relation.