22/06/2005
In the morning of 23rd May, 2005 the coffering ceremony of the Friendship Medal of Lao People’s Democratic Republic to Mme. Ha Thi Khiet, President of VWU was held in the Headquarters of the Vietnam Women’s Union for her active contribution in building and developing the friendship and solidarity between the two Parties, Governments and the women’s organizations. 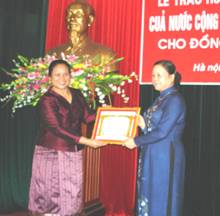 Delivering a speech in this medal conferring ceremony, Mme. Ha Thi Khiet expressed her emotion, honor and proud of being given this noble medal by Lao People’s Democratic Republic as well as affirming for her continuous efforts in strengthening the cooperation, solidarity and development between women, people of the two countries of Vietnam – Lao.

Also at this meeting, Mme. Nguyen Thanh Hoa, Vice-President of VWU introduced to the delegation about VWU movement and activities for the equality and advancement of the Vietnamese women, activity models with the aim to gather and involve members into women’s union activities. She said that Vietnam Women’s Union always want to strengthen its cooperation with Lao Women’s in the training field for women’s Union staff, exchanging and learning experience of organizing women’s union works. In many bordering provinces, women’s union of the two countries have had many fraternize and cooperation activities in preventing women and children trafficking.

Mme. o­nechanh Thammavong expressed her expectation for further cooperation and friendship activities between the two women’s organizations, to involve and enable women to participate in their respective national socio - economic construction and development.