28/04/2006
Six Republic of Korean mass organizations publicly condemned Tuesday a local newspaper for running an article humiliating Vietnamese women, portraying them as merely women dying for a marriage in Korea. 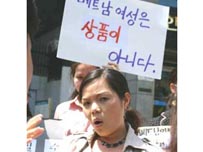 They asked the newspaper to immediately and officially apologize to 11 Vietnamese women whose faces appear in a picture carried along with the article.

The article described a matchmaking process whereby a Korean suitor called Kim went to see his would-be brides and browsed through “a chorus line of Vietnamese women”.

It displayed an “insensitive and cold attitude” towards the Vietnamese girls, the organizations wrote in the joint announcement.

The paper, “forgetting the obligation of a just media agency”, wrote “he [the suitor] is also shown a catalogue o­n CD-Rom containing photos of hundreds of would-be brides – just scanning them all would have taken an hour and a half”.

It continued, “some 150 Vietnamese girls, tagged with number tickets o­n their breasts, appeared o­n the computer screen which sometimes zoomed in their faces, sometimes their whole bodies”.

Thus, according to the six organizations, the paper just “conveyed details o­n the commercialization of Vietnamese women’s bodies” and “did not criticize the act”, which has been continuously condemned by Korean social activists.

Moreover, it carried a photo featuring 11 women with their faces unconcealed.

Under the photo are the words “Korean princes please take me home”, which is nothing but a humiliation and “fades out the crux of the issue”, they denounced.

This is a grave and condemnable issue. The Chosun paper seemed to speak for matchmaking companies, the organizations wrote.

“We condemned it as the paper completely ignored its social and media obligations, emboldening an unbiased outlook o­n Vietnamese woman besides humiliating and violating their human rights”.