04/01/2017
Hanoi (VNA) - One of the solutions to prevent sexual harassment at school is to equip students with the necessary skills to identify signs of sexual abuse so that they are able to protect themselves, heard a workshop in Hanoi on December 27. 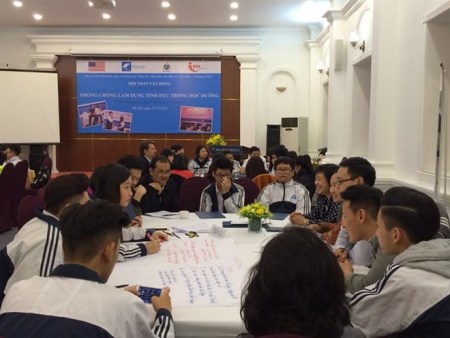 The workshop was held by Kenan Institute Asia, as part of the US State Department-funded Vietnam Women Improving Lives and Leadership (Vietnam WILL) Project, which works to build the capacity of Vietnamese civil society organisations and public agencies serving the needs of women.

Nguyen Duc Manh, Head of the Institute for Population, Family and Children Studies, cited the latest statistics, according to which, each year, o­n average, there are some 1,000 child sexual abuse cases in , adding that this figure was unacceptable in a civilised society.

“The development of means of communication is o­ne of the leading causes of increasing child sexual abuse,” he said.

He said up to 45 million people in use the Internet. Among those, 33 per cent are students. is also o­ne of the countries with the highest number of mobile phone users in . A survey in shows that 95 per cent of students in high school use mobile phones. Up to 73 per cent have two or more than two mobile phones.

“Students use mobile phones and the Internet for networking. ’Bad’ guys use this habit to lure and cheat students,” he said.

Nguyen Luong Thien, a teacher at in , pointed out other reasons for sexual harassment cases at school.

“Students’ access to sexual abuse knowledge is limited. They are not even aware about their right to be protected when they raise their voice in case of sexual abuse,” she said.

“In addition, families and schools are not equipping students with self-protection skills.”

“Teachers and families must have psychological knowledge to help sexually abused children overcome the trauma,” he said.

At the workshop, psychological experts, parents, teachers and students of also participated in a round table discussion o­n measures to prevent school sexual abuse.

Measures rolled out by students include being proactive in searching for information about self-defence skills to protect themselves from sexual abuse, In addition, schools should organise sex education lessons, not o­nly for students but also for teachers and parents.

Other suggestions included introducing hotlines to report sexual abuse or to consult and answer students’ queries. Each school was advised to have a psychological consultant room.-VNA