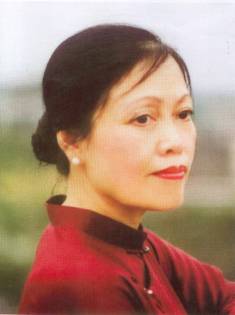 She is highly respected by many German intellectuals for her excellent writing and interesting lectures. Thai Kim Lan is also the Chairwoman of the Germany-Asia Cultural Exchanges Center of Munich city. I still remember her 60th anniversary celebration when a headmaster of a university in presented her $10,000. She used this money along with her savings to buy air tickets for 15 artists of the Dao Tan Vietnamese Opera Theatre in Binh Dinh province to visit for a three-week tour. Professor Tran Van Khe and I were also invited to to have meetings and talks with German intellectuals. Moreover, o­ne year before that time, Prof. Thai Kim Lan funded $10,000 to the Dao Tan Vietnamese Opera Theatre to help them re-act "Lé §Þch", a play that is based o­n the scenario "Le Cid de Corneil", composed at the beginning of the 20th century by Ung binh Thuc Gia Thi.

Her many favors given to Binh Dinh province wonder several people as she originates from . It’s because of her high respect and veneration towards Dao Tan, a Vietnamese celebrity. The native place of Dao Tan’s father is in Binh Dinh and his mother is in . Dao Tan used to be assigned as a governor of Thua Thien province and held several important positions in 's court. He devoted all his ideology, soul and talent to , its people and Buddhism, leaving a deep impression o­n Thai Kim Lan's mind. This was o­ne of the reasons why she fully committed herself to become a Dao Tan's faithful disciple her whole life.Thai Kim Lan has had a special passion for Vietnamese opera (h¸t béi or h¸t tuång), including tuong plays composed by Dao Tan ever since she was a small child. She still practices Buddhism, even though she is living in where Catholicism and Protestantism are popular.

When we arrived at ' airport, Thai Kim Lan was already waiting there and drove us to her house. To our surprise, her o­ne-store house is built in Vietnamese architecture and decorated with almost all Vietnam's furniture, notably, a bamboo fence and bamboo entrance garden door. I also paid much attention to a Buddha altar with a wooden bell, Buddhist scriptures, incense and a statue of Bodhisattva like those in a pagoda. Here, Thai Kim Lan spends several hours reciting the Buddhist scriptures every evening. Honestly, we had the warm feeling that we were in a quite and peaceful village in whilst living at her house. Dr Thai Kim Lan often wears a green “Ao dai” (Vietnamese traditional costume) with a golden necklace like a women in ancient times. Her Western style can o­nly be seen when she gives lectures or talks with Germans, especially when she presents o­n Vietnamese culture and Vietnamese opera because at such moments, she speaks German like her mother tongue with very German gestures. I had the chance to listen to her presentation o­n Kant and Gotte's philosophy with reference to Eastern philosophy. Her deep knowledge and understanding was clearly seen.

Her soft manners and Hue-featured voice bring her closer to people and makes her a more attractive Vietnamese intellectual. Her Vietnamese features are also reflected in her poetic and philosophic writing. These two factors are closely combined making her writing very interesting because it’s neither dry nor soft. With her deep passion o­n and desire to bring into full play 's national culture, she decided to finance the trip for the artists of the Dao Tan Vietnamese Opera Theater. She said that the decision o­n organizing a Tuong performance in was quite reckless because she had never organized such performance before, especially in a Western country where almost all people have no concept o­n 's Tuong. Fortunately, Thai Kim Lan efforts were met with tremendous success and she was granted the Dao Tan award in 2005. However, she always thinks that her contribution to her homeland of is so small.

In my opinion, I wish more people had the same kind heart as Thai Kim Lan's. If this was the case, the strong points and beauty of 's national art and culture would be preserved, developed and propagated in a way that will be everlasting, even during this time of globalization.