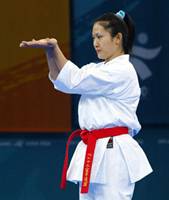 The country ranked fourth in the overall standings behind , where the sport originated, and and .

In the men's under-55kg kumite event, Pham Hoai Long lost to an Iranian athlete in the final and had to settle for the silver.

Meanwhile the women's kata team lost 0-5 to the Japanese in the final.

won three silvers and five bronzes in the last tournament.

The six-day tournament, which wrapped up o­n Sunday, attracted 464 athletes from 28 countries and territories. had four referees adjudicating at this year's tournament.

Mark Pierce won the men's division A, while Chu Hao finished first in division B.

Hao's wife, Do Thi Kim Oanh, won the ladies' category with an overall 72.

The charity event, which attracted about 100 participants, raised US$7,000 for Agent Orange victims.

U-23 team to play friendlies

The Viet Nam U-23 team, who returned home from a 10-day training course in Hongta, , and resumed training in Ha Noi, will play friendlies with local teams this week.

Coach Henrique Calisto and the Viet Nam Football Federation will seek opponents for the U-23 squad in preparation for the Southeast Asian (SEA) Games in this December.

It's expected that local teams, including Hoa Phat Ha Noi, T&T Ha Noi, Nam Dinh, Hai Phong and Da Nang of Dong Tam Long An will be powerful partners for the U23 team for friendly matches.