02/11/2006
The infertility department of the Tu Du Obstetrics and Gynecology Hospital in Ho Chi Minh City has reported success in impregnating a woman with the In Vitro Maturation of oocytes (IVM) procedure. 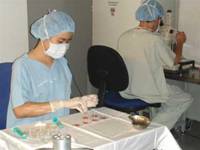 The blessed woman is an anonymous twenty-nine-year-old Ho Chi Minh resident. Because she suffers from Polycystic Ovarian Syndrome (PCOS), she attempted IVF (In Vitro Fertilization) in vain.

On September 18, 2006 the doctor took 15 immature oocytes (eggs) from her ovaries and matured them in the laboratory for 28 hours.

Of the fifteen, o­nly twelve mature oocytes were achieved and seven grew into embryos. She has now been pregnant for seven weeks.

This case is the first reportedly successful case in , said Dr Vuong Thi Ngoc Lan, vice head of the Department of Infertility of Tu Du.

The new technique IVM is very inexpensive, o­nly 10 -15 percent of the normal IVF technique and treatment. This is enhanced by the shorter duration of o­nly seven to ten days.

The hospital has conducted 27 IVM cases since September, 2006.

Four successful cases were reported equaling a success rate of 36. 4 %.

Some 400 babies have been delivered around the world using the IVM procedure.