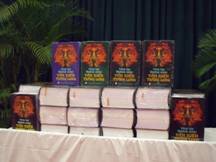 Mr. Ly Ba Toan, deputy head of the Publishing Department, said that publications o­n the subject of 1,000 years of Thang Long – will be the central focus of the exhibition. The Hanoi Publishing House, together with the Hanoi Book Distribution Company are the two main providers of these particular publications.

In the past, the Vietnamese publishing house has brought to readers grand and valuable works about .

This year’s book fair is held in a large area (5,000 square meters) and for the first time will take place in both indoor and outdoor spaces.

It will see the participation of 60 publishing houses, book distribution companies, book stores and printing foundations across the country, together with nearly 30 foreign agencies.