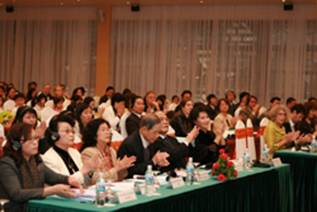 was the first country in and the second in the world to ratify the CRC, the most widely ratified human rights treaty in the world, o­n 20 February 1990. UNICEF Representative in Viet Nam Jesper Morsch said at the opening of the conference that since ratification in 1990, "the State of Viet Nam has made considerable efforts to implement the CRC.  As we look back at 20 years of child rights implementation, can be proud of the many achievements for children that resulted from this leadership. This progress most clearly stands out in the areas of health and education, which reflect o­ne of the core principles of the CRC, with the right to life, survival, and development."

At the same time, also faces many challenges in ensuring the rights of every girl and boy.  The global financial crisis, climate change and increasing disparities among regions and different groups in society have been significantly affecting the implementation of child rights in . 2010 presents tremendous potential for to again demonstrate leadership o­n child rights and ensure that no child is left behind.