11/03/2011
Two collectives and 17 individuals were honoured for their outstanding achievements in scientific and technological research and applications for production and business at a ceremony held by the Vietnam General Confederation of Labour (VGCL) in Hanoi o­n March 5. 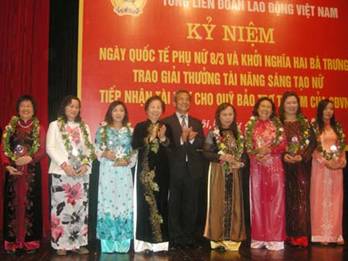 This was also an occasion to celebrate International Women's Day (March 8).

The event was attended by Ha Thi Khiet, Secretary of the Communist Party of Vietnam’s Central Committee (CPVCC) and Head of the CPVCC’s Commission for Mass Mobilisation; the Minister of Labour, War Invalids and Social Affairs Nguyen Thi Kim Ngan; Vice President Nguyen Thi Doan; the Chairwoman of the National Assembly’s Committee for Social Affairs Truong Thi Mai, and President of the VGCL, Dang Ngoc Tung, together with representatives from ministries, sectors, central organisations and nearly 180 female members of staff from the VGCL.

VGCL president Dang Ngoc Tung said the VGCL has always respected and appreciated the great contributions of women. The Fund for Female Creative Talents was established in 1992 to assist, support and reward outstanding women who have made notable achievements in studying and applying scientific and technological advances in production and to improve the quality of life.

Addressing the ceremony, Ha Thi Khiet praised the achievements and contributions that the women staff made to national construction and development as well as to trade union activities at all levels. She also spoke highly of the practical social work accomplished by the VGCL funds for Female Creative Talents and Children’s Support. She stressed that the VGCL should strive to improve their representation and protection of the rights and legitimate interests of its members and promote the role and potential of women in emulation movements.