06/01/2020
The trip ended, but the sentiments still last in the heart of Lao women. Mrs. Vatsana Silima - President of the Women&apos;s Union of Champasak Province, said “Everywhere they come, they are gracious to share and encourage us. It is not only a gift of friendship and solidarity but also generous and beautiful hearts of women”. 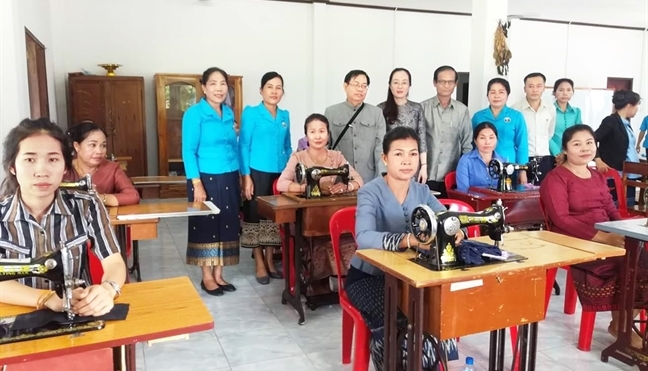 “Everywhere they come, they are gracious to share and encourage us. It is not only a gift of friendship and solidarity but also generous and beautiful hearts of women”.

On September 17, when the delegation of HCMC Women's Union visited Champasak province (Laos), the historic flood passed, leaving traces on the walls. According to teachers of the provincial kindergarten, over the past few days, they had to come one hour earlier every morning to scrub the walls, clean the school yard and repair teaching aids. Everywhere everyone worked hard on the ruins to recover themselves.

On the morning of September 18, participating the inauguration of the dormitory and opening two vocational training courses organized by Ho Chi Minh City Women's Union and Champasak Provincial Women's Union, Mr. Si Thon Keo Thu Vong - Member of the Provincial Party Standing Committee, Chairman of the Provincial Lao Front for National Construction - said “The historic flood in Champasak in early September washed away crops and property of 4,200 households, damaging many offices, schools, and hospitals. To this situation, four working delegations have come from Vietnamese provinces and cities for support. It was a practical encouragement to revive Champasak after the disaster.”

Regarding the inauguration of the dormitory for trainees and training of trainers vocational courses, Mr. Si Thon Keo Thu Vong said: “This support is very timely. This is a chance for Champasak women, especially those hit the hardest by the flood, to overcome the difficulties”.

At the same time, in the main hall of vocational training center, 15 women trainees of the suit-tailoring course were readily sitting by 15 sewing machines, listening to trainer Mr. Vo Thanh Phuong’s instructions on regulations and the training program. “We are expecting that after this course, we will become vocational trainers for other women, helping them find jobs”- Ms. Somdi, a trainee, said.

The dormitory is another meaning gift for the women attending Vocational Training Center. Many women live 50 kilometers away from the Center and it takes half a day for them to travel. Now that with the dormitory, it is more convenient for them to join vocational courses and they can concentrate on the training to have a stable job in future.

As part of the memorandum of understanding between HCMC and Champasak Women's Unions for 2018-2022 period, the construction of the dormitory on route 16A in Phonhsavanh village, Phonhthong district, Champasak province, was started in February 2019 with a total cost of VND 500 million, which is the contributon by women members of the HCMC Women's Union.

Furthermore, the HCMC Women's Union also presented a set of printer and computer for the Champasak Women's Union and VND 15 million to buy toys and facilities for Champasak kindergartens affected by the flood.