30/09/2009
A financial agreement worth nearly 16.7 million euro to help Vietnam improve its heathcare services was signed in Hanoi on September 18 between the Minister of Health, Nguyen Quoc Trieu, and Willy Vandengerghe, a representative of the European Commission. 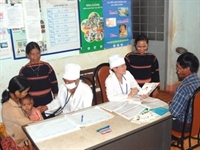 The EU and will provide more than 14.7 million euro in nonrefundable aid and will contribute 500,000 euro worth of medical supplies.

The project will be implemented in four years from 2009 to 2013 to expand services of the Ministry of Health and medical agencies in northern Ha , Bac Ninh and Bac Giang provinces.

Speaking at the signing ceremony, Minister Trieu praised the EU’s support for the Vietnamese healthcare sector in recent years and hoped that the project will improve the quality of healthcare services in .

Mr Vandenberghe said the project is part of the Vietnamese Government’s campaign to provide modern medical care for the poor.